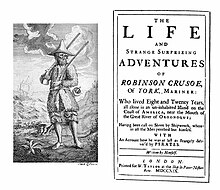 On this date we celebrate two influential works of fiction, both influenced by actual events. The first was Daniel DeFoe’s Robinson Crusoe (1719), a novel based on the real-life castaway Alexander Selkirk, who was rescued on this date in 1709. The second work of fiction is the novel Jaws by Peter Benchley, published on this date in 1974.  The idea for the book, Benchley’s first novel, began ten years earlier in 1964 when Benchley read a news story about a 4,550 pound Great White shark caught off the beaches of Long Island, New York. The brief news story sparked Benchley’s imagination:  “And I thought right then ‘What if one of these things came round and wouldn’t go away?’” (1).

The true story behind the fictional Robinson Crusoe begins in 1704.  Alexander Selkirk was a Sailing Master aboard the Cinque Ports, an English frigate fighting with Spanish vessels off the coast of South America.  When the captain of the Cinque Ports stopped at a desert island to re-stock supplies of fresh water, Selkirk refused to get back on board due to the ship’s less than seaworthy condition.  When the Cinque Ports left him behind, Selkirk hoped to quickly flag down another ship. This, however, was a more difficult task than he imagined.

Finally on February 1, 1709, Selkirk was rescued when two British ships spotted his signal fire. When the landing party came ashore, they were astonished by Selkirk’s appearance:  he looked like a wild man dressed from head to toe in goat skins.

In 1713 an account of Selkirk’s ordeal was published, and six years later, influenced by Selkirk’s adventures, Daniel Defoe published his novel Robinson Crusoe*.  Defoe’s book went on to become one of the most widely read books in history and is recognized today as the first work of realistic fiction.  Selkirk and Defoe also influenced world geography; in 1966 Mas a Tierra, the Pacific island which Selkirk inhabited for four years and four months, was renamed Robinson Crusoe.  A separate island, 100 miles west, has been renamed Alejandro Selkirk (2).

Like Defoe’s novel, the story of Jaws also follows an interesting path from fact to fiction.  The novel’s author Peter Benchley was working as a journalist in 1971 when he had lunch with a publisher from Doubleday.  They discussed Benchley’s book ideas which were all non-fiction.  At the end of the meeting the publisher asked Benchley, who had never written fiction, if he had any ideas for a novel.  At that point Benchley remembered the 1964 news story about the colossal shark caught off of Long Island.  He told the publisher,  “I want to tell the story of a Great White shark that marauds the beaches of a resort town and provokes a moral crisis.”

When Jaws was published on February 1, 1974, it made Benchley one of the most successful first-time novelists of all time.  The book spent 44 months on the New York Times bestseller list and sold over 20 million copies.  Benchley went on to co-write the screenplay for the book’s wildly successful film version; today the film Jaws, directed by Steven Spielberg, is recognized as the movie that invented the summer blockbuster.

Today’s Challenge:  All the Fiction That’s Fit to Print

What story from today’s newspaper could you adapt for a short story?  Select a story from a recent newspaper, and use the facts from the true story to spark your imagination.  Generate a central conflict from the true story that might be used in a fictional story, such as an individual fighting to survive alone on a desert island or a town struggling to survive attacks from a killer shark. (Common Core Writing 3 – Narrative)

Quotation of the Day:  Fiction is the lie through which we tell the truth. -Albert Camus

*The complete original title of Defoe’s novel is:  The Life and Strange Surprizing Adventures of Robinson Crusoe, Of York, Mariner: Who lived Eight and Twenty Years, all alone in an un-inhabited Island on the Coast of America, near the Mouth of the Great River of Oroonoque; Having been cast on Shore by Shipwreck, wherein all the Men perished but himself. With An Account how he was at last as strangely deliver’d by Pyrates.