On this day in 1987, the film Wall Street opened in theaters.  The film follows an ambitious young Wall Street broker named Bud Fox, played by Charlie Sheen, and a rich corporate raider named Gordon Gekko, played by Michael Douglas, who won the Oscar for best actor in the role. 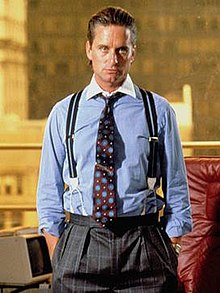 In one of the movie’s most powerful scenes, Gordon addresses a stockholders’ meeting of Teldar Paper, a company he is planning to take over.  In the speech Gordon attempts to change the audience’s perception of him from corporate raider to company savior by targeting the wastefulness of the company’s management.  The core of his message is that “greed is good,” and that he is a liberator rather than a destroyer of companies:

Teldar Paper has 33 different vice presidents each earning over 200 thousand dollars a year. Now, I have spent the last two months analyzing what all these guys do, and I still can’t figure it out. One thing I do know is that our paper company lost 110 million dollars last year, and I’ll bet that half of that was spent in all the paperwork going back and forth between all these vice presidents. The new law of evolution in corporate America seems to be survival of the unfittest. Well, in my book you either do it right or you get eliminated. In the last seven deals that I’ve been involved with, there were 2.5 million stockholders who have made a pretax profit of 12 billion dollars. Thank you.

I am not a destroyer of companies. I am a liberator of them! The point is, ladies and gentleman, that greed, for lack of a better word, is good. Greed is right. Greed works. Greed clarifies, cuts through, and captures the essence of the evolutionary spirit. Greed, in all of its forms; greed for life, for money, for love, knowledge has marked the upward surge of mankind. And greed, you mark my words, will not only save Teldar Paper, but that other malfunctioning corporation called the USA. Thank you very much (1).

The essence of Gordon’s claim in his speech is the sentence, “Greed is good.”  Syntactically speaking, this sentence is a classic example of a  predicate adjective, a type of sentence in which a subject is linked with an adjective.  With predicate adjectives, a linking verb acts as a kind of equal sign to connect the subject and the adjective, as in Greed = good. Most of the time linking verbs are forms of the verb to be (am, is, are, was, were, will be); however, there are other verbs that also serve to link the subject and the adjective, such as the verbs appear, become, feel, look, sound, and taste.

Here are some other examples of predicate adjectives:

Life is not fair.

The students were angry.

Infanticide is rampant among prairie dogs.

Today’s Challenge: Roses Are Red, Violets Are Blue, Predicate Adjectives Are Nothing New

One caveat for using predicate adjectives is to watch out for making unsupported subjective claims.  For example, notice that in addition to stating his claim that “greed is good,” Gordon Gekko also varies his syntax and supplies additional evidence and explanation to support his claim.  Sometimes writers or speakers think that stating something with authority, such as “This is boring,” makes it true.  On the contrary, the validity of any stated claim rests on its backing, its support, and its explanation.

What is a claim that you could state in the form of a predicate adjective, and how would you support it?

Use the list of of subjective adjectives below to construct a claim about a topic you feel strongly about:

Make sure that your claim is a predicate adjective and that it is an opinion, not a fact.  For example, if you say, “The house is red,” you would be stating a fact.  In contrast, if you say, “The house is ugly,” that’s an opinion.  Follow up your claim with specific details that support your claim.  Make sure to vary your syntax and go beyond just linking verbs that state what “is.” (Common Core Writing 1 – Argument)

Quotation of the Day:  Music is subjective to everyone’s unique experience. -Jared Leto