On this day in 1974, President Richard Nixon signed the Emergency Highway Energy Conservation Act which established a 55 mile per hour speed limit on the nation’s highways.  Nixon’s effort to conserve gasoline was spurred by the 1973 oil crisis where Arab countries declared an oil embargo, dramatically increasing U.S. gas prices (1). 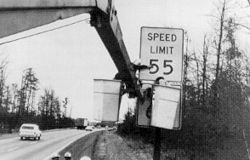 As Moss explains in his introduction, 55-Fiction is a little like a one-minute episode of “The Twilight Zone,” or “what O. Henry might have conjured up if he’d had only the back of a business card to write upon . . . .” Shakespeare said it best: “Brevity is the soul of wit,” and in the 21st century, where sound bites compete for our limited attention span, 55-Fiction is the perfect form (2).

The keys to 55-Fiction are a good story, concise — yet clear — writing, and a denouement with a payoff. Surprise, irony, and/or humor are the hallmarks of the truly great short, short stories.

While 55-fiction is fun to read and write, these are not just frivolous throwaways. The writer of a good 55-Fiction piece must practice many of the key techniques of any good writer: clear diction, vivid detail, concise language, careful revision, and thoughtful editing.

Here are a couple of examples:

Last Call
It’s a dark summer evening. Lightning strikes in the distance. Two young lovers rendezvous. She lies sleeping. He kisses her soft, yet strangely warm lips. He makes a toast to his love and drinks. As he swallows, his cell phone rings. He grabs it with a trembling hand. “Romeo! Stop! Listen! Juliet’s not really dead!!”

Alone
He shivered in the darkness. Long ago, there had been 12 in his pack, disappearing over time. Only he remained. Suddenly, a change; the light at the end of the tunnel was coming nearer. Giant hands grabbed him, pulling him towards the light. God, perhaps? Then, a voice: “Mom, we’re down to the last soda!”

Today’s Challenge:  Fifty-Five Test Drive
What is an anecdote that you can tell in no more than 55 words?  Write your own 55-word short story. Use the guidelines below. If you can’t think of an original story, consider adapting something from classic literature, as in “Last Call.”

Quotation of the Day:  Less is more. -Andrea del Sarto