Today is the birthday of children’s author and poet Paul Fleishman. Born in 1952, Fleishman grew up in Santa Monica, California.  His father, Sid Fleishman, was also an award-winning author of children’s books.

Fleishman graduated from the University of New Mexico in 1977, and before he became a full-time writer, he worked as a bookstore clerk, library shelver, and proofreader.  His work as a proofreader led to the founding of two grammar watchdog groups:  ColonWatch and The Society for the Prevention of Cruelty to English (1). 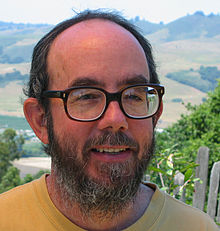 Fleishman won the most prestigious award in children’s literature in 1989, the Newbery Medal, for his book Joyful Noise:  Poems for Two Voices. In Joyful Noise, Fleishman popularized a new poetic genre, the poem for two voices. Written to be read aloud by two people, each poem is written in two columns.  Each reader is assigned a single column, and the two readers alternate, reading the lines in turn from the top to the bottom of the page.  Reader’s join their voices whenever words are written on the same line in both columns.

How to Read a Poem for Two Voices

only the lines in the left column.

As you can see, I waited my

If words appear on the same

Line in both columns,

One voice on the left,

Plus another on the right,

Given poetic license, what two people, places, things, or ideas would you like to see hold a conversation?  Write your own poem for two voices.  Begin by brainstorming some contrasting ideas:  people, places, ideas, or things.  You have poetic license to give voices to anyone or anything.  Here are some ideas to get you started:  father and son, dog and cat, protagonist and antagonist, summer and winter, success and failure, noun and verb, football and baseball.  Craft your poem in the two-column format, and when you have a solid draft, work with a partner to bring the poem to life by reading it aloud.  Revise and practice until you have a poem that’s ready to be shared with a larger group. (Common Core Writing 2 – Expository)