On this day in 1967, the Beatles worked to complete the recording of the song I Am the Walrus.  Known for their innovative work in the studio, the group on this day did something truly unique, blending the conclusion of their new song with a BBC recording Shakespeare’s King Lear.

In addition to the Bard, the Beatles also drew inspiration from two other poetic sources.  One was Lewis Carroll’s poem “The Walrus and the Carpenter,” which inspired the song’s title and its plentiful use of nonsense lyrics.  The second was a playful nursery rhyme that they remembered from their childhood in Liverpool:

All mixed together with a dead dog’s eye,

Slap it on a butty, ten foot thick,

Then wash it all down with a cup of cold sick. (1) 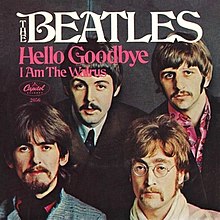 This bit of rather grotesque verse inspired the colorful lyric:  “Yellow matter custard, dripping from a dead dog’s eye.”

The Beatles had no name for their process of creative synthesis, and they were so ahead of their time that they really didn’t need one.  Today, however, we have a name for it; it’s called a “mash-up.”

According to Newsweek, the word “mash-up” was coined in 2001 by DJ Freelance Hellraiser who used Christina Aguilera’s vocals from ‘Genie in a Bottle’ and “recorded [them] over the instrumentals from ‘Hard to Explain’” (2).

Mash-ups are certainly not limited to music, however. A mash-up applies to any combination of two or more forms of media: music, film, television, computer program, etc. As seen by the examples below, these creative combos synthesize just about every imaginable form of media:

Sense and Sensibility and Sea Monsters – a book mash-up that combines classic fiction and sea stories.

Star Wars:  Invasion Los Angeles:  a computer-animated video created by Kaipo Jones that sets the intergalactic battle from the film Star Wars among the familiar and famous sites of Los Angeles.

TwitterMap –  an internet mash-up that combines Twitter and Google Maps to create a visual map of Tweets.

What one word fits between the words ‘Jelly’ and ‘Bag’ to form two separate compound words? Jelly __________ Bag The answer is the word “bean” as in jelly bean and beanbag.  This is a type of lexical mash-up called Mother Tongue Lashing. It takes advantage of the wealth of compound words and expressions in English. For each pair of words below, name a word that can follow the first word and precede the second one to complete a compound word or a familiar two-word phrase.

Now, create your own list of 8 Mother Tongue Lashings.  Use a dictionary to make sure that you have two-word expressions or compound words, not just two-word combinations. (Common Core Language 3 – Knowledge of Language)

1- The Beatles Bible.com. I Am the Walrus. https://www.beatlesbible.com/songs/i-am-the-walrus/2/.