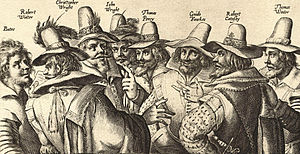 Although he was not the ringleader of the plot, Guy Fawkes became the “face” of the Gunpowder Plot.  This is probably because he was the one man caught red-handed, with matches in his pocket, skulking in the basement of the House of Lords waiting to light the fuse.  Once capture, Fawkes was tortured and signed a confession.  He also implicated his fellow conspirators who were hanged with him on January 31, 1606.

With a dark lantern, lighting a match! (3)

Frequently in English, the famous and infamous become enshrined in the language when their last names become common, lower case nouns or verbs (called eponyms). In rare cases, however, a first name becomes a part of the lexicon.  Guy Fawkes not only became the subject of burned effigies, but also his first name became synonymous with anyone of odd appearance. Across the Atlantic, the name is used in American English to refer to any male, either bad or good. It is also a handy word used in its plural form to refer to any group of people (2).

Guy Fawkes, himself, has undergone a makeover, transforming from villain to rebel hero and freedom fighter.  This is due mainly to the graphic novel and movie V for Vendetta.  Set in a dystopian Britain, the book and film feature a hero who wears a Guy Fawkes mask and who battles the future fascist government of Britain.

What hero or villain, who is not already honored with a day on the calendar, should be recognized with his or her own specific day? What makes this person influential or notorious enough to rate having a dedicated day on the calendar, and what kind of activities would you suggest to appropriately mark the day? Brainstorm a list of important figures and events from history. Select the one person you would honor, and write a proclamation which explains who the person is and what specific date will be set aside to recognize the person.  Include some background on what the person did and why the person is important.  Finally, include some details on the kinds of activities that will accompany the person’s special day. (Common Core Writing 2 – Expository)