On this day in 1926, Branch Rickey gave a speech entitled “The Greatest Single Thing a Man Can Have” to the Executives Club of Chicago. Rickey is best known as the man who broke Major League Baseball’s color barrier by signing Jackie Robinson to the Brooklyn Dodgers in 1947.

Rickey was fired as the manager of the St Louis Cardinals in 1925; however, the owner of the team, recognizing Rickey’s talent for player development, offered Rickey a position as an executive for the team.  In this new position, Rickey began to invest in several minor league baseball clubs, using them to develop future talent for the Cardinals.  By doing this Rickey invented what is now a staple of Major League Baseball, the minor-league farm system. 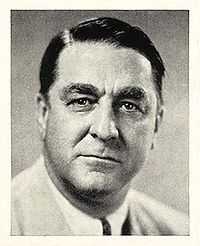 In his speech to the Executives Club, Rickey began with an anecdote from his time as the Cardinals’ manager.  It involved an amazing feat of athleticism, not by one of his players, but by an opposing player for the Detroit Tigers, Ty Cobb.  In the play, Cobb stole two straight bases to score the winning run in extra innings.  In describing the play, Rickey expressed his amazement at Cobb’s audacity; Cobb did not rely on luck to win the game; instead, “he made his own breaks.”

The tenaciousness displayed by Cobb on the base paths — his unwillingness “to alibi his own failures” and his singular desire to be the best — is what Cobb argues is the single greatest thing a ball player or any person can have (1).

Rickey’s speech is made memorable by its inductive organization.  Beginning with a specific incident by a specific person in a specific place, Rickey first shows his point to his audience before he tells it.  As he continues, he broadens the focus from Cobb, to baseball players in general, and finally to people in general.  Rickey’s audience expected him to talk about baseball, but Rickey knew he was talking to a group of business executives.  The genius of his speech is that he was able to combine the details about Cobb with a universally applicable principle of success.

What would you argue is the single greatest thing a person can have?  Brainstorm a list of ideas, and try for a variety of ideas that range from general qualities to concrete objects.  Once you have your best idea, write a speech that is organized inductively — that is, one that begins with an example or anecdote to show rather than tell.  After your specific example or anecdote, broaden your point to make it universally applicable to a general audience. (Common Core Writing 1 – Argument)