Today is the anniversary of the celebration of the first Memorial Day in 1868.

After the Civil War ended in 1865, many communities in the North and the South began holding tributes to fallen soldiers.  These commemorations, which were originally called Decoration Day, were held in the spring when flowers were readily available for the decoration of graves. 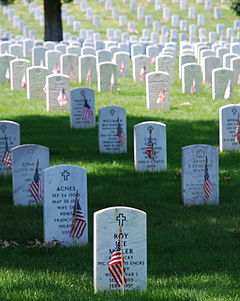 On May 5, 1868, American General John Logan, national commander of the Grand Army of the Republic, a Civil War veterans group, issued General Order Number 11, which said:

The 30th day of May, 1868, is designated for the purpose of strewing with flowers or otherwise decorating the graves of comrades who died in defense of their country during the late rebellion, and whose bodies now lie in almost every city, village, and hamlet church-yard in the land.

Decoration Day gradually evolved to be called Memorial Day. And after World War I, it became a day to honor not just fallen Civil War soldiers, but all war dead. Not until 1971 did Memorial Day become an official federal holiday.  In that year, the Uniform Monday Holiday Act established Memorial Day as the last Monday in May, which created a three-day weekend for federal workers (1).

While Memorial Day is a day to remember those who gave their lives in past wars, it can also be a day to remember the power we all have to revisit the past through the genre of memoir.  In memoir, we are given the ability to time travel and vicariously take part in the intimate experiences and thoughts of writers who have documented the significant moments of their lives.

There is no greater example of this than in Marcel Proust’s The Remembrance of Things Past, a seven-volume memoir published over a period of fourteen years (1913-1927). Proust’s flood of memories is launched in a single remarkable moment, as he is sitting drinking a cup of herbal tea with a madeleine:

And as soon as I had recognised the taste of the piece of madeleine soaked in her decoction of lime-blossom which my aunt used to give me (although I did not yet know and must long postpone the discovery of why this memory made me so happy) immediately the old grey house upon the street, where her room was, rose up like a stage set to attach itself to the little pavilion opening on to the garden which had been built out behind it for my parents (the isolated segment which until that moment had been all that I could see); and with the house the town, from morning to night and in all weathers, the square where I used to be sent before lunch, the streets along which I used to run errands, the country roads we took when it was fine.

Through his sense of taste, Proust’s memory is magically unlocked, and he is involuntarily transported in an instant to a vivid remembrance of his past.

Proust’s work is just one example of many brilliant memoirs that allow us to see, smell, taste, feel, and hear what others have experienced in their past.

Here are a few examples:

The Diary of a Young Girl by Anne Frank

Down and Out in Paris and London by George Orwell

My Left Foot by Christy Brown

The Story of My Life  by Hellen Keller

Reading Lolita in Tehran:  A Memoir in Books by Azar Nafisi

This Boy’s Life: A Memoir by Tobias Wolff

On Writing: A Memoir of the Craft by Stephen King

Today’s Challenge:  Past Is Prologue

What are some of the most significant moments from your past that are vivid enough that you could describe them in detail?  Brainstorm some specific moments from your life that you remember vividly.  Select one moment and write about it, describing it as vividly as possible with sensory imagery.  Also, reflect on why the incident remains meaningful to you today and why it lingers in your memory. (Common Core Writing 3 – Narrative)

Quotation of the Day:  Own only what you can always carry with you: know languages, know countries, know people. Let your memory be your travel bag. –Aleksandr Solzhenitsyn