Released on this day in 1980 was the film The Empire Strikes Back.  The second installment of the original Star War trilogy, features the debut of one of the most memorable characters in the history of science fiction: Yoda.  Although small and unimposing in appearance, Yoda is a wise and powerful Jedi master who trains Luke Skywalker in the ways of the Force. Just as distinctive as Yoda’s appearance is his manner of speaking. 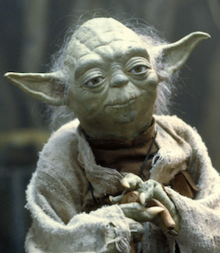 From the first words out of Yoda’s mouth when he meets Luke Skywalker, we realize something is different in his speech pattern:

Luke: I’m looking for someone.

Yoda: Looking? Found someone, you have, I would say, hmmm?

The reason Yoda’s manner of speaking seems odd to us is because it doesn’t follow the typical pattern of English syntax.  The majority of sentences in English follow the subject-verb-object word order.  In his speech, however, Yoda inverts the typical word order to verb-object-subject.  For example, instead  of saying to Luke, “You still have much to learn,” Yoda says,  “Much to learn, you still have.”

Yoda’s syntax might seem alien, but it’s not. Generations of writers, especially poets, have used the rhetorical device called anastrophe (or inversion) to rearrange the syntactic furniture for effect (Anastrophe in Greek means “turning back or about.”).  Using something other than the usual word order, makes the reader slow down a bit and spend a bit more time pondering a phrase or a clause.  Anastrophe also allows writers to add emphasis to a particular word, just as you might move your sofa to a more prominent position in your living room.

The question is: to be, or not to be?

Instead, Shakespeare used anastrophe to alter the typical pattern, kicking off the most famous soliloquy in English with:

To be, or not to be, that is the question.

Here are a few classic quotations:

Give me liberty or give me death. -Patrick Henry

You must be the change you wish to see in the world. -Mahatma Gandhi

The unexamined life is not worth living. -Socrates

Necessity is the mother of invention. -Plato

The pen is mightier than the sword. -Edward Bulwer-Lytton

Quotation of the Day:  Much to learn, you still have. -Yoda