One of the most iconic and most anthologized short stories ever written is set on this day.  The story is Shirley Jackson’s “The Lottery.”

The date is established in the story’s opening line:

The morning of June 27th was clear and sunny, with the fresh warmth of a full-summer day; the flowers were blossoming profusely and the grass was richly green. 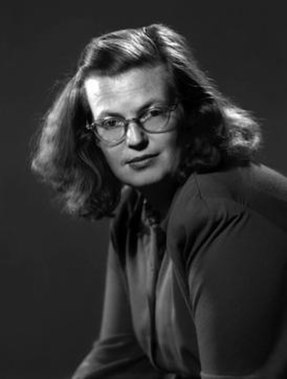 While the story’s opening sentence paints a calm, serene picture, the events of the story soon turn dark and even horrifying as the reader discovers why the residents of an unidentified small American village have gathered.  In an annual rite, the villagers draw lots to determine which one of them will be stoned to death.

Soon after the story was published in the June 26, 1948 edition of the New Yorker, a deluge of letters arrived expressing the shock and bewilderment of its readers.  In fact, “The Lottery” sparked more letters to the New Yorker than any work of fiction it ever published.  Some of the readers were critical — including some who cancelled their subscriptions — but most were simply confused by the story, wanting an explanation of its meaning (1).

On July 22, 1948, nearly one month after the story’s publication, Jackson wrote to the San Francisco Chronicle, giving a brief explanation of the story’s meaning:

Explaining just what I had hoped the story to say is very difficult. I suppose, I hoped, by setting a particularly brutal ancient rite in the present and in my own village to shock the story’s readers with a graphic dramatization of the pointless violence and general inhumanity in their own lives (2).

The day and month of the story’s setting are noteworthy.  June 27th has significance dating back to the Roman calendar as the first day of summer.  It was known as Initium Aestatis or the Feast of Aestas, the Roman Goddess of summer (3).

But perhaps more noteworthy in determining the meaning of “The Lottery” is the year of its publication:  1948.  In her take on the meaning of the story, Ruth Franklin, biographer of Shirley Jackson, explains why it makes sense that a story like this would emerge three years after one of history’s darkest and most brutal wars — World War II:

[“The Lottery”] anticipates the way we would come to understand the twentieth century’s unique lessons about the capacity of ordinary citizens to do evil—from the Nazi camp bureaucracy, to the Communist societies that depended on the betrayal of neighbor by neighbor and the experiments by the psychologists Stanley Milgram and Philip Zimbardo demonstrating how little is required to induce strangers to turn against each other. In 1948, with the fresh horrors of the Second World War barely receding into memory and the Red Scare just beginning, it is no wonder that the story’s first readers reacted so vehemently to this ugly glimpse of their own faces in the mirror, even if they did not realize exactly what they were looking at (4).

Quotation of the Day:  I frankly confess to being completely baffled by Shirley Jackson’s ‘The Lottery.’ Will you please send us a brief explanation before my husband and I scratch right through our scalps trying to fathom it?  –Miriam Friend in a letter to the editor of The New Yorker.