On this day in 1963, John Lennon and Paul McCartney began composing the song “She Loves You.”  They began on their tour bus, continued work in their hotel room in Newcastle, and finished the following day at the home of Paul’s father in Liverpool. 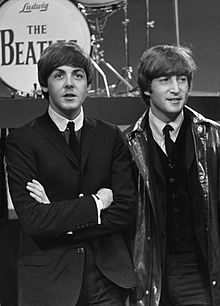 When they finished the song, John and Paul played it for Paul’s father, Jim McCartney.  His response was: “That’s very nice son, but there’s enough of these Americanisms around. Couldn’t you sing ‘She loves you, yes, yes, yes!’?”  (1).

In his biography of Paul McCartney entitled Many Years From Now, Barry Miles quotes Paul, discussing the song’s grammar:

“It was again a she, you, me, I, personal preposition song. I suppose the most interesting thing about it was that it was a message song, it was someone bringing a message. It wasn’t us any more, it was moving off the ‘I love you, girl’ or ‘Love me do’, it was a third person, which was a shift away. ‘I saw her, and she said to me, to tell you, that she loves you, so there’s a little distance we managed to put in it which was quite interesting.”

Of course, Paul should have said personal pronoun, not preposition.

When it comes to rock songs and pronouns, who can forget the Grammar Rock Pronoun song?  It tells just about everything you need to know about pronouns and why we use them.

What are some examples of your favorite songs that have pronouns in their titles?  Create a list of your top 5 favorite songs with pronouns in their titles.  Include the artist and a brief explanation of why you like the song. If you are a Beatles fan you might list the following examples:  “I’ve Just Seen a Face,” “Don’t Let Me Down,” “I, Me, Mine,” “I Saw Her Standing There,” “I Want to Hold Your Hand.” (Common Core Writing 2 – Expository)