Today is the anniversary of one of the most significant pieces of legislation in American history. On this day, President Franklin Delano Roosevelt signed into law the Service Members’ Readjustment Act of 1944, commonly known as the GI Bill. Between 1944 and 1956 more than 7.8 million World War II veterans participated in the educational or training program. 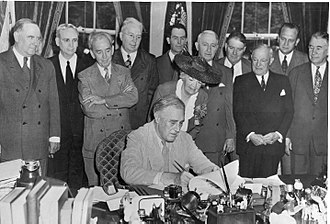 Prior to the GI Bill, a college education was primarily an option only for the rich. Likewise, home ownership was out of the financial reach of most Americans. The GI Bill, however, fueled the American dreams of millions of returning GIs. Almost half took advantage of the education and training aspects of the programs, while nearly 2.4 million took out home loans backed by the Veterans Administration.

With the end of World War II in sight, the GI Bill was a proactive step to prevent the problems that occurred in after World War I. Thousands of returning American soldiers at that time were given just $60 and a train ticket home. There was little thought of helping these doughboys with the transition from military to civilian life. During the Great Depression, thousands of veterans marched on Washington, D.C. in 1932 demanding payment of a promised bonus. Instead of money, the veterans received an order to disperse. President Herbert Hoover called up active duty soldiers, led by General Douglas MacArthur, to clear out the Bonus Marchers’ camps using tear gas, bayonets, and rifles.

Soldiers returning from World War II thankfully had the GI Bill to ease them back into civilian life. Instead of unrest at the nation’s capital, an unprecedented post-war boom across the nation resulted after World War II.

In 1984, the GI Bill was revamped under the leadership of Mississippi Congressman Gillespie V. “Sonny” Montgomery. Known as the Montgomery GI Bill, it features VA home loan guarantees as well as education programs just like the original GI Bill (1).

The abbreviation G.I. originates from the U.S. Army designation for galvanized iron, the kind of iron used for heavy garbage cans. The term, through misinterpretation of the initials, came to mean government-issue or general-issue in the 1930s, referring to items issued to soldiers upon induction into the armed forces — items such as uniforms, boots, or soap. The term GI first appeared in print referring to an enlisted man in 1939. In 1942, a comic strip for the Army weekly Yank used the term GI Joe, further popularizing the term (2).

In the armed forces shorthand language, such as abbreviations and acronyms, is used with high frequency, so much so that the Army, for example, has an entire regulation devoted to the subject. It’s called Army Regulation 25-52: Authorized Abbreviations, Brevity Codes, and Acronyms (ABCA).

The three different classes of shortened forms are defined in the regulation as follows:

Abbreviation: An abbreviation is a shortened form of a word or phrase. For example, appt – appointment, assgd – assigned, or PA – Pennsylvania.

Acronym: An acronym is a word formed from the initial letters of a name or parts of a series of words. For example, ACTS means Army Criteria Tracking System; ARIMS means Army Records Information Management System; and ASAP means as soon as possible.

Below is a list of common U. S. Army abbreviations, brevity codes, and acronyms. See if you can identify what each stands for.

Quotation of the Day: Neither a wise nor a brave man lies down on the tracks of history to wait for the train of the future to run over him. -Dwight D. Eisenhower