On this day in 323 BC, an ancient king and an ancient philosopher died.

The king was Alexander the Great, the Macedonian general who conquered most of the ancient world.  As a youth, Alexander was tutored by the philosopher Aristotle, and his favorite author was Homer. Legend says that he slept with a copy of the Iliad and a dagger under his pillow.  After earning his first military victory at the age 18, Alexander fought for the next 15 years with an undefeated record in battle.  When Alexander realized there were no more worlds to conquer, he wept. 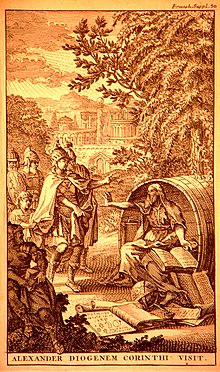 The ancient philosopher was Diogenes the Cynic.  Diogenes believed in living a life free of conventions and constraints.  He eschewed possessions and famously made his home in a large discarded clay jar.  He once owned a wooden cup, but discarded one day when he witnessed a young boy using his cupped bare hands to drink water.  Diogenes was known to walk through the marketplace in the middle of the day carrying a lighted lamp. When asked why he carried the lamp and inspected the faces of those he met, Diogenes answered, “I am trying to find a man.”

Although these two men died in separate parts of the world — Alexander in Babylon and Diogenes in Corinth — the two men are connected in cultural memory through one of history’s best-known anecdotes.

The story goes that the young Alexander once made a visit to Diogenes’ hometown of Corinth.  Everyone flocked to catch a glimpse of the great leader, to hear him speak, and to gain his favor — everyone that is but Diogenes.  Since Diogenes did not come to see him, Alexander determined to make a personal visit to see the philosopher. Accompanied by a throng of admirers, Alexander approached Diogenes’ home, the large barrel-shaped jar.  Diogenes did not greet the young conqueror; in fact, he didn’t even stand. Instead, he simply sat up on one elbow. After a short period of awkward silence, Alexander asked: “Diogenes, is there anything I can do for you?”

“Yes,” Diogenes replied, “Stand to one side.  You’re blocking the sunlight.”

The crowd was hushed and amazed at Diogenes’ insolence, but Alexander was unphased.  He simply turned away and said quietly, “If I were not Alexander, I should be Diogenes.”

More than one ancient biographer wrote that Alexander and Diogenes died on the same day, June 10, 323 BC.  The exact cause of the two men’s deaths is not exactly clear. Although it might be expected that the warrior Alexander died in battle, no such report exists.  Instead accounts of his death conflict. Some say he died of poisoning, others of malaria or typhoid fever. Only 32 years of age at his death, Alexander’s body was submerged in a vat of honey to stave off decay.

As for the death of Diogenes, there are also conflicting accounts.  One account claims he simply held his breath, another claims he became ill after eating raw octopus, and still another claim he died of infection from a dog bite.

This last possibility is especially ironic, considering that Diogenes’ creed of Cynicism means “doggishness.”  In his History of Cynicism, the scholar R. Dudley explains why the Cynics embraced a dog’s life:

There are four reasons why the Cynics are so named. First because of the indifference of their way of life, for they make a cult of indifference and, like dogs, eat and make love in public, go barefoot, and sleep in tubs and at crossroads. The second reason is that the dog is a shameless animal, and they make a cult of shamelessness, not as being beneath modesty, but as superior to it. The third reason is that the dog is a good guard, and they guard the tenets of their philosophy. The fourth reason is that the dog is a discriminating animal which can distinguish between its friends and enemies. So do they recognize as friends those who are suited to philosophy, and receive them kindly, while those unfitted they drive away, like dogs, by barking at them. (2)

Today’s Challenge:  From History to Story

Who are some great historic figures you would like to know more about?  What are some specific stories that include one or more of these individuals?  Brainstorm a list of historic figures who are of interest to you.  Do a bit of research to discover an anecdote about one of them. Before you begin writing, however, note the difference between the words “historical” and “historic.”  “Historical” refers to anything or anyone from the past; “historic,” in contrast, refers to something or someone important from the past. Therefore, when you do your research on a “historic anecdote” focus on important or famous people from the past.  Tell the story of a single specific incident using your own words. (Common Core Writing 3 – Narrative)

Quotation of the Day:  Alexander died, Alexander was buried, Alexander returneth to dust, the dust is earth, of earth we make loam—and why of that loam, whereto he was converted, might they not stop a beer barrel?  -Hamlet in William Shakespeare’s Hamlet, the Tragedy of the Prince of Denmark