Today is the anniversary of the birth of the nuclear age. On July 16, 1945 at 5:29 a.m., a mushroom cloud rose into the sky above the New Mexico desert, the first ever detonation of a nuclear weapon. 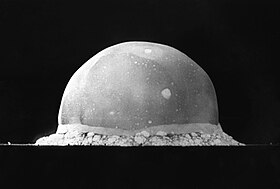 Batter my heart, three-person’d God, for you

As yet but knock, breathe, shine, and seek to mend ;

That I may rise, and stand, o’erthrow me, and bend

Your force, to break, blow, burn, and make me new.

The test, which took place in total secrecy, resulted in a blast equivalent to 21,000 tons of TNT, more than two times what was predicted by Los Alamos scientists. The blast completely vaporized the 100-foot steel tower the bomb was placed on before the test. The bomb’s mushroom cloud rose seven and a half miles into the sky, and the bomb’s shockwave was felt 100 miles away.

The 260 witnesses to the test were each sworn to secrecy. The official press release attributed the explosion to an ammunitions dump accident. On August 6, 1945, the world learned the truth when the atomic bomb, codenamed “Little Boy,” was dropped on Hiroshima, killing an estimated 140,000 people.  Three days later another atomic bomb, called “Fat Man,” was dropped on Nagasaki.  The Japanese surrendered on August 15, 1945, ending World War II.

Before the test J. Robert Oppenheimer used religious imagery to name the Trinity Test, and he turned again to a religious text after the test, quoting a line from the Hindu Bhagavad Gita:

I am become Death, the destroyer of worlds.

Describing the atomic bomb’s explosion as a mushroom cloud is not the first time that English speakers have turned to food items as metaphors.  When it comes to metaphors, you might say that our cup runneth over.  You might even say that the English language features a smorgasbord of tantalizing turns of phrase.  Here are just a few examples for you to chew on:

Because many of the metaphors we use are familiar, we forget that they’re metaphors at all.  When a metaphor loses its freshness and enters the language as a staple menu item, we call it an idiom, “an expression that doesn’t make sense when translated literally but that is nevertheless almost universally understood.”  For example, imagine someone learning English as a second language who runs into the phrase “couch potato.”  A direct translation of the two words makes little literal sense in any language; nevertheless, most English speakers know the figurative meaning of the idiom — “a lazy person” — because it’s a stock phrase that they have heard or read before.

This is the magic of language.  Metaphors season our language, enhancing its flavors and making everything more tasty.  Author Bernard Malamud (1914-1986) said it best:

I love metaphor. It provides two loaves where there seems to be one. Sometimes it throws in a load of fish.

There is a miraculous side to metaphors, but as George Orwell reminds us, an old metaphor sometimes become stale.  Instead of trying to resurrect these “dead metaphors” as Orwell calls them, it’s best to let them rest in peace:

A newly invented metaphor assists thought by evoking a visual image, while on the other hand a metaphor which is technically ‘dead’ (e. g. iron resolution) has in effect reverted to being an ordinary word and can generally be used without loss of vividness. But in between these two classes there is a huge dump of worn-out metaphors which have lost all evocative power and are merely used because they save people the trouble of inventing phrases for themselves (2).

Returning to the miraculous side of metaphor, writer and linguist Michael Erard served up a banquet of mouth-watering metaphors in his 2013 essay
“A Pledge to My Readers:  A Year in the Artisanal Language Movement.”  Read this excerpt as an appetizer:

. . . . For nouns, I’m going to a nearby family-owned farm, where Anglo-Saxon and Latinate varieties are raised free-range, grass-fed, and entirely hormone-free. The farmers will regularly replenish my stocks with deliveries by bicycle, ensuring that these words ripen on the page, not in a cargo hold in the middle of the Pacific.

Getting fresh, organic verbs used to pose a challenge, because of the unusual way they propagate. Yet once I began searching out indigenous varieties of words, I was surprised to find all sorts that aren’t known outside the local area. There’s a small, family-run verb operation that conjugates them in small batches, the old-fashioned way. I also stumbled across a number of hard-to-find heirloom verbs that haven’t been seen in urban markets for 100 years, because their flesh bruises too easily, and because they don’t fit the cosmetic ideal. Let’s face it: An English verb grown in Chile may look perfectly connoted, but its pulpy taste can’t compete with the pungent verve of a local specimen, and who cares if it won’t win beauty contests? (3)

What are some examples of expressions or familiar phrases used in English that refer to specific foods in a figurative manner rather than a literal manner, such as – “butter fingers,” “smart cookie,” or “peanut gallery”?  Is there one particular one you like?  Why?  Brainstorm a list of food idioms.  Then, select one to write about.  Write as though you are speaking to a student who is learning English as a second language, explaining the figurative meaning of the idiom and providing vivid specific examples of how it might be use.  You might also explore the origin, or etymology, of the idiom.

Quotation of the Day:  Failure is the condiment that gives success its flavor. -Truman Capote

3- Erard, Michael. “A Pledge to My Readers:  A Year in the Artisanal Language Movement.”