Our modern Valentine’s Day rituals date back to an ancient Roman fertility rite called Lupercalia, celebrated from February 13-15.  Roman myth tells of the twin brothers Romulus and Remus who were abandoned in a cave (Lupercal) of a she-wolf (lupa).  The twins survived and went on to become the founders of Rome thanks to the she-wolf who nursed them. 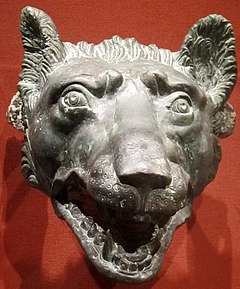 To commemorate the deliverance of Romulus and Remus each year, priests gathered at Palatine Hill above Rome to sacrifice goats and a puppy along with making an offering of grain.  Two young boys were then stripped naked and clothed in the freshly skinned coats of the sacrificed goats. In addition to the goatskins, the boys were also given a narrow strip (or thong) cut from the hide of the goats.  These thongs were called februa, meaning “instruments of purification.”  Running down hill and through the city streets, the two boys slapped everyone they met with the februa in a symbolic act of purification.  Women often came forth to be struck since they believed the ceremony rendered them fertile, as well as ensured an easy delivery in childbirth.

A less violent aspect of Lupercalia festival was a lovers lottery where young men would be coupled with young women by drawing names randomly from a jar.

The modern name of Valentine’s Day also originated with the Romans; however, the day’s name resulted more from martyrdom than from a fertility rite.  In the 3rd century A.D., Roman Emperor Claudius II executed two men in two different years.  Both men were named Valentine and both men were executed on February 14.  Later, the Catholic Church commemorated the two saints’ martyrdom with the feast of St. Valentine.  In 494, attempting to expel pagan traditions, Pope Gelasius I outlawed Lupercalia and replaced it with Valentine’s Day (2).

Today we associate Valentine’s Day more with Venus – the Roman goddess of love – than with Catholic saints.  And the most ubiquitous symbol of the day is Venus’ son Cupid.  It’s his bow and quiver of arrows that represent the capriciousness of romantic love; anyone struck by one of his arrows is instantly filled with uncontrollable desire.

As we can see from the history of Valentine’s Day, it is a tradition filled with symbols that attempt to make the abstract ideas of romantic love and attraction more concrete.  In a similar fashion, lovers have attempted to make the abstract idea of love more concrete through the use of metaphor.  Notice in the following examples, the variety of metaphors used by various writers to define this elusive yet universal emotion:

Love is like war:  easy to begin but very hard to stop. -H.L. Mencken

Love is like a virus.  It can happen to anybody at any time.  -Maya Angelou

Love is an exploding cigar which we willingly smoke. -Lynda Berry

Love is the wildcard of existence. -Rita Mae Brown

Love is a snowmobile racing across the tundra and then suddenly it flip over, pinning you underneath.  At night, the ice weasels come. -Matt Groening

Love is the master-key that opens the gates of happiness of hatred, of jealousy, and, most easily of all, the gates of fear. -Oliver Wendell Holmes, Sr.

Love is like an hourglass, with the heart filling up as the brain empties. -Jules Renard

Love is the ultimate outlaw.  It just won’t adhere to any rules.  The most any of us can do is sign on as its accomplice. –Tom Robbins

Love is the only disease that makes you feel better. -Sam Shepard

Today’s Challenge:  Love Is a Metaphor

What is the best thing anyone has ever said about love?  What makes this person’s observations so insightful?  Select a quotation about love, either from the quotations above or from your research.  Your quotation can be lines from a poem, lyrics from a song, or prose from a Valentine’s Day card.  Explain why you find the quotation so insightful and specifically why you agree with it.  (Common Core Language 3 – Knowledge of Language)

Quotation of the Day:  Life is a journey. Time is a river. The door is ajar. -Jim Butcher