Today is the birthday of philosopher and author Mortimer J. Adler (1902-2001).  As a teen, Adler dropped out of high school and worked as a copyboy for the New York Sun, but he later resumed his education at Columbia University.  After he finished the academic requirements for his bachelor’s degree, Adler was not allowed to graduate because he had refused to participate in physical education.  Nevertheless, Adler continued at Columbia as a teacher and a graduate student until he earned his Ph. D. in experimental psychology.  When he finally walked across the stage to collect his doctorate, he was the only Ph.D. in the country without a master’s degree, a bachelor’s degree, or a high-school diploma. 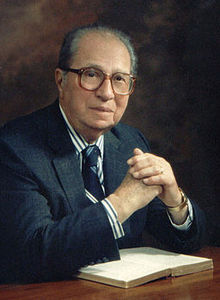 Soon Adler moved to the Midwest to teach philosophy at the University of Chicago.  At Chicago, he worked closely with his university’s president, Robert Maynard Hutchins, to develop a new liberal arts curriculum based on a core collection of outstanding works that constitute the foundation of the literature of Western culture. Together Adler and Hutchins initiated the Great Books Foundation, a non-profit organization founded to promote continuing liberal education among the general public.

In addition to the writings of the canon, the Great Books of the Western World included a two-volume index to the 102 “Great Ideas.” Compiled by Adler, this index is called the Syntopicon and contains all references to each of the Great Ideas in the Great Books.

By Great Ideas, Adler means the “vocabulary of everyone’s thought.”  The ideas are not technical terms or specialized jargon of different branches of learning; instead, the Great Ideas are “the ideas basic and indispensable to understanding ourselves, our society, and the world in which we live (1).  For Adler philosophy is not just an academic pursuit; instead, philosophical thought is the business of everyone, and inquiring and conversing about big ideas is a core part of what it means to be human.

Below is an A to W listing of some of the Great Ideas. Each of these ideas are universal in the sense that each is a “common object of thought,” meaning these are ideas which any two human beings should be able discuss.  Unlike the tangible, common objects we interact with, these are ideas — intangible, abstract objects that live in the mind.

What is a single universal idea or theme that appears in the work of two separate authors?  Identify a single universal idea, such as truth, wisdom, or democracy, and explain how that idea appears in two different written works The works may be fiction, drama, poem, or non-fiction.  In the course of explaining your idea, relate your interpretation of what you think each author is saying about this idea, along with specific evidence from the text that supports your interpretation. (Common Core Writing 2 – Expository)

Quotation of the Day:  In the case of good books, the point is not to see how many of them you can get through, but rather how many can get through to you. -Mortimer Adler