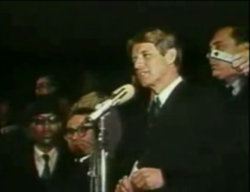 On the evening of April 4, 1968, Senator Robert F. Kennedy, who was running for the Democratic nomination for president, was preparing to give a campaign speech in Indianapolis.  Just before he was scheduled to speak to the predominately African-American audience, Kennedy learned that Martin Luther King, Jr. had been assassinated in Memphis, Tennessee.

Kennedy was warned by the police that the crown had not yet heard the bad news and that they might become unruly or violent once they heard of King’s death. Despite the danger, Kennedy decided not only to address the audience but also to inform them of the tragedy.

Kennedy spoke for fewer than five minutes, but what he said in those few minutes will never be forgotten.  He began by immediately delivering the bad news. After pausing for a moment to allow the shocked crowd to gather its wits, Kennedy reminded the audience of King’s efforts to replace violence with understanding and compassion.  He showed empathy for his audience, comparing the anger they were feeling to the anger he felt when his brother was killed by an assassin five years earlier in Dallas. Instead of focusing on the racial divide in the United States, Kennedy instead made an appeal for unity and for justice:

Like Martin Luther King, Jr. did before him, Kennedy appealed to hope over despair and to peace over violence:

Kennedy did not have to speak on April 4, 1968, and no one would have faulted him for canceling his appearance under the sad circumstances.  Nevertheless, Kennedy seized the moment to courageously present what was much more than just a campaign speech. His brief words transformed a moment of sorrow into a time of rededication to the mission of Martin Luther King, Jr. and to the what Abraham Lincoln called “the better angels of our nature.”

Two months later, on June 5, 1968, Kennedy himself was assassinated after winning the California presidential primaries (1).

The second act of courage that took place on this day was in George Orwell’s novel Nineteen Eighty-Four.

In the novel’s opening chapter, the protagonist Winston Smith commits a forbidden act of rebellion, an act that we all take for granted. In the world of the novel Nineteen Eighty-Four, the simple act that Winston performs could lead to punishment by death or a sentence of twenty-five years of forced labor:

The thing that he was about to do was to open a diary. . . . He dipped the pen into the ink and then faltered for just a second. A tremor had gone through his bowels. To mark the paper was the decisive act. In small clumsy letters he wrote:

He sat back. A sense of complete helplessness had descended upon him.. . .

Suddenly he began writing in sheer panic, only imperfectly aware of what he was setting down. His small but childish handwriting straggled up and down the page, shedding first its capital letters and finally even its full stops:

In the dystopian world of Orwell’s Nineteen Eighty-Four, the one-party government of Oceania is in a perpetual state of war and is led by the all-seeing but unseen leader called Big Brother.  By putting his pen to paper, Winston Smith, a party worker, is committing the radical and unlawful act of expressing his own individual thoughts and questioning his government.

What are the reasons we should not take our ability to read, think, speak, and write for granted?  In the years leading up to the American Revolution, John Adams wrote an essay called “A Dissertation on the Canon and the Federal Law” (1765).  In this essay, Adams laid the legal groundwork for the Revolution, challenging his readers to remember the important role that literacy plays as the foundation of human freedoms:

Let us tenderly and kindly cherish, therefore, the means of knowledge.  Let us dare to read, think, speak, and write.

Write a Public Service Announcement (PSA) that challenges your audience to reconsider and reimagine the importance of literacy — of speaking, writing, thinking, and writing.  Motivate your audience to rededicate themselves to these skills that we so often take for granted. (Common Core Writing 1 – Argument)

Quotation of the Day:  Learning to read is probably the most difficult and revolutionary thing that happens to the human brain and if you don’t believe that, watch an illiterate adult try to do it. -John Steinbeck