On this day in 1397, Chaucer read his great work The Canterbury Tales before the gathered ladies and gentleman of the English court.  It was not surprising that someone would read stories out loud. After all, in the 14th century, before Gutenberg introduced movable type, books were rare. What was surprising, however, was the language that Chaucer wrote in and spoke in as he read his stories: English. 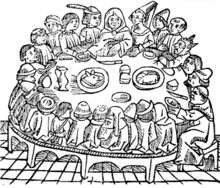 Since the Norman Invasion of England in 1066, French and Latin had been the language of the court and the language of power.  English was spoken, but primarily by the peasantry. Change began to happen, however, as England waged war against France in The Hundred Years’ War (1337-1453).  Anti-French attitudes opened the door for English, the vernacular tongue of the commoners, to become more and more acceptable among the nobility.

Chaucer’s work begins with a group of 29 travelers gathered at the Tabard Inn in London to begin their pilgrimage to the shrine of Saint Thomas Becket, a Christian martyr, in Canterbury.  The pilgrims are accompanied by Harry Bailly, the host of the Tabard, who proposes a story contest. Volunteering himself as the judge, Bailly presents the stakes: the winner of the contest will be awarded a dinner paid for by the group when they return back to the Tabard Inn.

Thus begins the framing device for the collection of tales that became the first important work of literature in English and that earned Chaucer the title:  “Father of English Literature” (1).

What are the essential key elements that make a good story?  What criteria would you use for judging the effectiveness of a story?  Brainstorm some criteria for storytelling and create a judge’s ballot that spells out each of your criterion along with the maximum points you would award for each of your criteria. (Common Core Writing 3 – Narrative)

Quotation of the Day:  Storytelling is a very old human skill that gives us an evolutionary advantage. If you can tell young people how you kill an emu, acted out in song or dance, or that Uncle George was eaten by a croc over there, don’t go there to swim, then those young people don’t have to find out by trial and error. -Margaret Atwood