On this day in 1963, Martin Luther King, Jr. penned his Letter from Birmingham Jail. 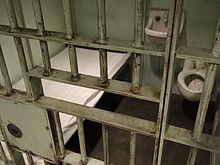 Having been jailed for demonstrating against the injustice of racial segregation in Birmingham, King read a public statement in the newspaper that criticized his activities in Birmingham.  The letter was signed by eight Alabama clergymen. It is this letter that moved King, a clergyman himself, to answer his critics. In the Letter from Birmingham Jail we have a classic example of counterargument in action.  Respectfully responding to his critics’ claims point by point, King’s letter remains one of the strongest rhetorical rebuttals ever written.

King begins his letter by answering the charge that he is an outsider.  He answers this charge by talking about his affiliation with Christian organizations in Birmingham and the fact that he was invited to come.  Most forcefully, however, he argues that “Injustice anywhere is a threat to justice everywhere.”

Among the several counterarguments presented by King, perhaps his strongest is his response to his critics’ claim that his demonstrations are “untimely.”

Notice in the following excerpt how King combines reason and emotion to pointedly rebut the claim that African-Americans should be patient and wait for justice:

We know through painful experience that freedom is never voluntarily given by the oppressor; it must be demanded by the oppressed. Frankly I have never yet engaged in a direct action movement that was “well timed,” according to the timetable of those who have not suffered unduly from the disease of segregation. For years now I have heard the word “Wait!” It rings in the ear of every Negro with a piercing familiarity. This “wait” has almost always meant “never.” It has been a tranquilizing thalidomide, relieving the emotional stress for a moment, only to give birth to an ill-formed infant of frustration. We must come to see with the distinguished jurist of yesterday that “justice too long delayed is justice denied.” We have waited for more than three hundred and forty years for our constitutional and God-given rights. The nations of Asia and Africa are moving with jet-like speed toward the goal of political independence, and we still creep at horse and buggy pace toward the gaining of a cup of coffee at a lunch counter.

I guess it is easy for those who have never felt the stinging darts of segregation to say wait. But when you have seen vicious mobs lynch your mothers and fathers at will and drown your sisters and brothers at whim; when you have seen hate filled policemen curse, kick, brutalize, and even kill your black brothers and sisters with impunity; when you see the vast majority of your twenty million Negro brothers smothering in an air-tight cage of poverty in the midst of an affluent society; when you suddenly find your tongue twisted and your speech stammering as you seek to explain to your six-year-old daughter why she can’t go to the public amusement park that has just been advertised on television, and see tears welling up in her little eyes when she is told that Funtown is closed to colored children, and see the depressing clouds of inferiority begin to form in her little mental sky, and see her begin to distort her little personality by unconsciously developing a bitterness toward white people; when you have to concoct an answer for a five-year-old son asking in agonizing pathos: “Daddy, why do white people treat colored people so mean?”; when you take a cross-country drive and find it necessary to sleep night after night in the uncomfortable corners of your automobile because no motel will accept you; when you are humiliated day in and day out by nagging signs reading “white” men and “colored”; when your first name becomes “nigger” and your middle name becomes “boy” (however old you are) and your last name becomes “John,” and when your wife and mother are never given the respected title “Mrs.”; when you are harried by day and haunted by night by the fact that you are a Negro, living constantly at tip-toe stance never quite knowing what to expect next, and plagued with inner fears and outer resentments; when you are forever fighting a degenerating sense of “nobodiness” — then you will understand why we find it difficult to wait. There comes a time when the cup of endurance runs over, and men are no longer willing to be plunged into an abyss of injustice where they experience the bleakness of corroding despair. I hope, sirs, you can understand our legitimate and unavoidable impatience.

After King wrote his letter by hand, it was turned over to his assistants who typed it and disseminated it as an “open letter” (See February 3:  Open Letter Day).

As the power of King’s rebuttals demonstrate, it is important to consider counterclaims in any argument you make.  By anticipating and clearly stating the arguments that run counter to your claim, you show the reader that you are not blind to the arguments of others who think differently than you do.  By rebutting counterargument or conceding to points made by the opposing side, you demonstrate to your reader that your argument is not just an exercise in persuading an audience that you are right; instead, it demonstrates to your audience that you are someone who is legitimately seeking the truth.

What are some possible objects that reasonable people might make to a position that you hold?  Brainstorm some issues that you feel strongly about and the claims that you would make about these issues.  Then, instead of building your case based on the reasons for your position, record the counterclaims. In other words, state your claim, and anticipate what reasons someone might give to disagree with your claim. (Common Core Writing 1 – Argument)

Quotation of the Day: Just as Socrates felt that it was necessary to create a tension in the mind so that individuals could rise from the bondage of myths and half-truths to the unfettered realm of creative analysis and objective appraisal, we must see the need of having nonviolent gadflies to create the kind of tension in society that will help men rise from the dark depths of prejudice and racism to the majestic heights of understanding and brotherhood. -Martin Luther King, Jr.