Today is the deadline for a delightful contest for deplorable writing: The Bulwer-Lytton Fiction Contest (BLFC), where entrants face the challenge of writing the worst possible opening sentence to a novel. The contest began in 1982, created by Scott Rice of the San Jose State University English Department. 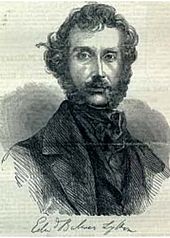 The contest is named after the prolific Victorian novelist Edward George Earle Bulwer-Lytton (1803-1873). He was a contemporary of Dickens, and in the 19th century, his novels were nearly as popular as Dickens’. Bulwer-Lytton’s flair for the melodramatic has inspired more than twenty years of good bad writing, “writing so deliberately rotten that it both entertains and instructs,” according to Scott Rice.

It was a dark and stormy night; the rain fell in torrents — except at occasional intervals, when it was checked by a violent gust of wind which swept up the streets (for it is in London that our scene lies), rattling along the housetops, and fiercely agitating the scanty flame of the lamps that struggled against the darkness.

An overall winner is selected in the contest each year, but there are also category winners for various genres, including western, detective, romance, and science fiction. Below is the overall winner for the 2002 contest, written by Rephah Berg of Oakland, California:

On reflection, Angela perceived that her relationship with Tom had always been rocky, not quite a roller-coaster ride but more like when the toilet-paper roll gets a little squashed so it hangs crooked and every time you pull some off you can hear the rest going bumpity-bumpity in its holder until you go nuts and push it back into shape, a degree of annoyance that Angela had now almost attained.

Today’s Challenge: The Good, the Bad, and the Funny

What are some examples of bad ways to begin a story?  Get a head start on next year’s Bulwer-Lytton Fiction Contest. Read the rules below; then, write your own one-sentence masterpiece.

The rules of the Bulwer-Lytton Fiction Contest are simple:

Each entry must consist of a single sentence but you may submit as many entries as you wish. Sentences may be of any length (though you go beyond 50 or 60 words at your peril), and entries must be “original” (as it were) and previously unpublished.

Surface mail entries should be submitted on index cards, the sentence on one side and the entrant’s name, address, and phone number on the other.

Email entries should be in the body of the message, NOT in an attachment. If you are submitting multiple entries, please include them in one message.

Entries will be judged by categories, from “general” to detective, western, science fiction, romance, and so on. There will be overall winners as well as category winners.

The official deadline is April 15 (a date that Americans associate with painful submissions and making up bad stories). The actual deadline may be as late as June 30.

The contest accepts submissions every day of the livelong year.

Wild Card Rule: Resist the temptation to work with puns like “It was a stark and dormy night.” Finally, in keeping with the gravitas, high seriousness, and general bignitude of the contest, the grand prize winner will receive . . . a pittance.

Quotation of the Day: The pen is mightier than the sword. –Edward George Earle Bulwer-Lytton