Today is the birthday of Charles Darwin (1809-1882), the Victorian naturalist known for the theory of evolution.  From 1831 to 1836 Darwin sailed aboard the HMS Beagle to the Galapagos Islands and the coast of South America.  Based on the observations he made on this five-year trip, Darwin published, in 1859, the single most influential book of the nineteenth century, On the Origin of Species by Means of Natural Selection, or Preservation of Favored Races in the Struggle for Life.  Darwin’s work not only revolutionized science, especially the fields of biology and anthropology, but it also sparked furious philosophical, religious, and ethical debates–debates that continue even today.

After his five-year voyage, Darwin returned home to an intense internal debate, not about issues of science but issues of matrimony.  Having fallen in love with his first cousin Emma Wedgwood, Darwin contemplated whether or not to pop the question.  Being a scientist, he approached the matter in a rational and methodical manner, sitting down and writing out a list of pros and cons. Under the heading “Marry” some of the notable arguments for having a wife were “Constant companion . . . better than a dog” and “someone to take care of house.”  As for the cons, under the “Not Marry” heading, he listed, “Less money for books” and “cannot read in the evenings.”  Despite the fact that Darwin’s “Not Marry” column included more reasons than his “Marry” column, we know that in the end, he decided to marry.  He and Emma were married on January 29, 1839.  They had ten children and remained married until Charles died in 1882 (1).

Of course, Darwin was not the first to use the pros and cons method of decision making.  It dates back to Roman times.  “Pros and cons” is derived from the Latin pro et contra, which translates into English as “for and against.”  Another noted man of science who advocated the pro et contra method was Benjamin Franklin.  He wrote a letter to a friend on September 19, 1772, in which he praised this rational method of putting your thoughts on paper:

And tho’ the Weight of Reasons cannot be taken with the Precision of Algebraic Quantities, yet when each is thus considered separately and comparatively, and the whole lies before me, I think I can judge better, and am less likely to take a rash Step; and in fact I have found great Advantage from this kind of Equation, in what may be called Moral or Prudential Algebra. (2)

It was the Greek tragedian Sophocles who warned, “Quick decisions are unsafe decisions.”  A pros and cons list is a great way to slow down your thinking and force yourself to see at least two sides of an issue.

Recall, Retrieve, Recite, Ruminate, Reflect, Reason:  How did Darwin use a pros and cons list for one of his important life decisions?

Challenge – Decisions, Decisions:  What are some of life’s major decisions that require the kind of careful thought and deliberation that require a pros and cons list?  Create your own pros and cons list based on an important life decision that you might make in the future.  Force yourself to go beyond your own biases by trying to create a list that has a balanced proportion of pros and cons.  With Valentine’s Day drawing near, for example, you might consider whether or not to pursue a relationship with a significant other.  Below are some other examples of crucial life decisions:

Own a Pet/Don’t Own a Pet

Buy a Home/Rent a Home or Apartment

Buy a New Car/Lease or Buy a Used Car

Work for a Company/Be Self-Employed

-February 12, 1809:  Abraham Lincoln was born on this day in a log cabin near Hodgenville, Kentucky. He said, “People are just as happy as they make up their minds to be.”

-February 12, 2002:  U.S. Secretary of Defense Donald Rumsfeld presented what we might call the “Gettysburg Address of Epistemology” when he discussed evidence regarding Iraq’s possession of weapons of mass destruction:

Reports that say that something hasn’t happened are always interesting to me, because as we know, there are known knowns; there are things we know we know. We also know there are known unknowns; that is to say we know there are some things we do not know. But there are also unknown unknowns—the ones we don’t know we don’t know. And if one looks throughout the history of our country and other free countries, it is the latter category that tends to be the difficult ones.

On this day in 1650, French philosopher Rene Descartes died. After moving from France to join the court of Queen Christina of Sweden in 1649, Descartes became ill and died of pneumonia.

Unfortunately, the story of what happened to Descartes’ body post mortem is neither a restful nor peaceful one.  He was initially buried in a cemetery in Stockholm, but in 1666 his body was exhumed in order to be returned and reburied in his native France.  During the French Revolution, his body was exhumed again.  Because of fears that the revolutionary rebels might defile his corpse, his bones were hidden in the Museum of Monuments.  Finally in 1819, while the bones were being collected for a third and final burial, French officials discovered that Descartes’ skull was missing. After an extensive search, the skull was relocated.  It turns out that when Descartes’ body was first exhumed in 1666, one of the Swedish guards took the skull as a memento of the intellectual giant before it could be sent to France.

Today all of Descartes’ body resides in Paris, France; however, his skull and body are still separated.  The skull resides in the Museum of Man, an anthropology museum, and the body is buried in the Abbey of Saint-Germain-des-Prés (1).

Although the posthumous saga of Descartes’ body and skull is an interesting one, a far more important philosophical concept associated with Descartes is the mind-body problem.  The problem — also known as Cartesian dualism — relates to the separation of mind and matter.  How do we account for the separation between our physical body — which includes our brain — and our non-physical thoughts?  For Descartes, reality is made up of two substances:  thinking substances, which are abstract and non-physical, coming from the mind; and extended substances, which take up physical space and include the body and the brain.

One of the thinking substances that consumed Descartes’ mind was the concept of doubt.  Being skeptical of the knowledge he was supposed to accept on faith from his teachers, Descartes employed doubt in a quest for indubitability:  the quality of something that he could believe to be unquestionably true and free of all doubt.  How could he be sure, for example, that his “reality” was not just a dream?  Likewise, how could he trust his senses?  Are the things he saw, heard, and felt reality or just false perceptions?  Is it possible that some kind of supernatural, diabolical demon was deceiving him, crafting a world of illusion to distort reality?

Descartes finally arrived at the conclusion that there was one indubitable thing:  thoughts.  Since existence is a prerequisite for thought, his thoughts, including his doubts, are the best evidence for existence.

Welsh philosopher Mark Rowlands sums it up as follows:

The result of Descartes’ rumination and cogitation is today seen as the most famous of all philosophical pronouncements:  cogito ergo sum  — I think, therefore, I am.

Recall, Retrieve, Recite, Ruminate, Reflect, Reason:  How did Descartes overcome his doubt about his own existence?

Challenge – I Think, Therefore, I Quote:  Besides Descartes’ famous sentence, what are some other examples of single sentences packed with philosophical insights?  Do some research on some important philosophical quotations; then, select one and explain why you think it is important.

February 11, 1847:  American inventor Thomas Edison was born on this day. He said:

and the other eighty-five percent would rather die than think.

February 11, 1990:  Nelson Mandela, who led the movement to end apartheid in South Africa, released after spending 27 years in prison. While in prison, he acquired a smuggled copy of Marcus Aurelius’ Meditations.

Mandela never forgot the day that he left prison for freedom:

As I walked out the door toward the gate that would lead to my freedom, I knew if I didn’t leave my bitterness and hatred behind, I’d still be in prison.

On this date in 1811, Governor Elbridge Gerry of Massachusetts signed a bill that readjusted the political map of Massachusetts.  The new map was redrawn to favor the incumbent Democratic-Republican Party and weaken the electoral prospects of the Federalist party. 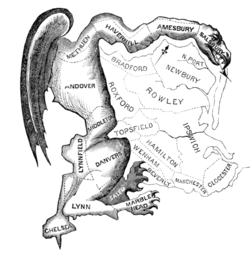 Under normal circumstances Gerry’s action might have become a lost footnote in history; however, due to a brief conversation between a Boston newspaper editor and an artist, a new word was born.

After the bill was passed, Gilbert Stuart, a political cartoonist for the Boston Gazette, was looking at a map of the new Essex County voting district.  Struck by the district’s convoluted contours he took out his pencil and added a few lines, including a head, wings, and claws.  He then turned to Benjamin Russell, the paper’s editor, and said, “There, that will do for a Salamander.” Russell responded with a pun, “Salamander? Call it a Gerrymander!”  At that moment a new word and new political epithet was born.

On March 26, 1812, the word went public when Stuart used “Gerry-mander” as the title for his cartoon drawing of the redrawn boundaries of the voting district.

Ever since Governor Gerry has been the namesake of this notorious political practice by which incumbent politicians and political parties attempt to maintain power.  It should be noted, however, that the historical record of Elbridge Gerry is not entirely tainted.  He was an original signer of both the Declaration of Independence and the Articles of Confederation.  He also became the 5th Vice President of the United States in 1813, serving under President James Madison (1).

Gerrymander is just one example of the deep, layered meaning found in the language of politics.  With political words, it is especially important to remember that to understand words we need to go beyond just their denotations – their dictionary definitions.  Instead, we need to consider their connotations – the feelings, associations, and emotions that words evoke.

The following collection of words is just a small A to Z sample of words that have distinctive meaning when used in political contexts:

Today’s Challenge: The Words of Political Prose and Politics

What are some English words that you would categorize as distinctly political words – that is words that are associated with government and power?  Brainstorm a list of political words.  Take one word that you find interesting, and research that word’s etymology, its meaning, and some historical examples of how it has been used as well as how it might be used today.  Write a report including all of your findings.  Your mission is to help the reader understand the word’s denotation as well as its connotations.

Quotation of the Day:  Political language . . . is designed to make lies sound truthful and murder respectable, and to give an appearance of solidity to pure wind. -George Orwell in Politics and the English Language