Subject:  Nudges – The fly in the airport urinal

Event:  The New York Times publishes an article on nudges, 2009

What can a fly in a urinal in an Amsterdam airport teach us about human thinking?

An article published in The New York Times on this day in 2009 answers this question.  The article “When Humans Need a Nudge Toward Rationality” explores the work of behavioral economist Richard Thaler and his colleague Cass R. Sunstein.  The work of these two men is built on the premise that humans are not rational creatures and that they often make decisions that are not in their own best interest.  The antidote for this irrationality is “nudges,” changes to the environment that Thaler says “attract people’s attention and alter their behavior in a positive way, without actually requiring anyone to do anything at all.”

The fly in the urinal is a great example of a nudge, a feature in the environment that influences or alters our behavior or decisions. First came the problem of spillage in the airport men’s restroom.  How might these men be subtly influenced to improve their marksmanship?  Second comes the nudge:  an image of a fly was etched near the urinal drain.  The addition of a target worked, reducing spillage by 80 percent.

In their book Nudge: Improving Decisions About Health, Wealth, and Happiness, Thaler and Sunstein review multiple examples of how nudges can be employed to improve the physical and financial health of people, helping them to eat less, save more, and act more sensibly.  Sustain and Thaler describe their mission as “libertarian paternalism,” the idea that public and private institutions can create environmental structures that help encourage individuals to make better choices (1).

One example of how nudges work on a national level is with organ donation.  In the United States, despite the fact that over 85% of Americans are in favor of organ donation, fewer than one third grant permission.  For example, when you renew your driver’s license, you must check a box to give explicit-consent to donate your organs.  In contrast, many European countries practice presumed-consent, which means a person becomes an organ donor by default and must check a box to opt-out.  In countries like Austria, France, and Poland, where the presumed-consent nudge is practiced, over 99% of citizens are organ donors.  Often when people make difficult decisions, they don’t want to do the complex thinking required to make a decision.  As a result, they most often resort to the default as the path of least resistance.  As seen in the organ donation example, defaults should be an area of examination for individual citizens as well as governments, for they play an important role in the decisions we make (2).

Recall, Retrieve, Recite, Ruminate, Reflect, Reason:  What is a nudge, and how can airport urinals and organ donation teach us about human thinking and decision making?

Challenge – The Existing State of Affairs:  One phenomenon that relates to nudges is the status quo bias.  Do some research on this bias; then, write an explanation of what it is and how it helps us to better understand human thinking.

-February 7, 1825:  Today is the birthday of German zoologist Karl August Mobius.  He conducted a famous experiment with a fish tank.  In one end of the tank, he placed a pike; in the other, he placed some smaller fish.  The pike and the smaller fish were separated by a glass panel.  Early in the experiment, when the pike became hungry, he attempted to launch himself at the smaller fish.  Each time, however, he failed, banging his nose against the invisible barrier.  After several repeated, painful attempts, he ceased to attack.  At this point, Mobius removed the glass divider.  Although the divider was gone, the pike still did not attack the smaller fish; he had “learned” to associate attacking other fish with pain.  Like Mobius’ fish, we humans sometimes come down with Pike Syndrome, allowing false assumptions based on past experience to limit our beliefs and our willingness to explore new territories.

-February 7, 1910:  Today is the anniversary of the premier of Chantecler, a play by Edmond Rostand, based on an ancient French fable. The play’s main character is a rooster who believes that his crowing causes the sun to rise.  The rooster’s misconception concerning cause and effect led some to call his error the Chanticleer fallacy; it’s also known as post hoc ergo propter hoc or “after this, therefore because of this.” Regardless of what you call it, this fallacy is one of the most common, since humans — like roosters — love to fool themselves into thinking that they can explain the reasons behind how and why things happen.

Today is the birthday of James A. H. Murray, editor of the Oxford English Dictionary (OED).  Born in Denholm, Scotland in 1837, Murray was a self-educated scholar, especially interested in philology — the study of written language and the evolution of language.  After he published a book on Scottish dialects in 1868 and became an active member of the British Philological Society, he was invited to become part of a monumental project that would consume the rest of his life. 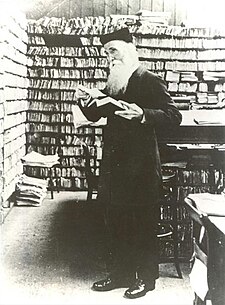 Despite the fact that some English dictionaries existed prior to the 19th-century, no truly comprehensive dictionary of the English language had yet been published.  In an age of imperialism, England was ascending as a world power, and with this ascension, English was becoming a global language.  The British wanted a dictionary that matched its new status as a world power, a dictionary that included a complete inventory of its words, along with complete definitions and a biography of every word, including the date of each word’s birth.

To accomplish this monumental task, Murray needed help.  Gathering quotations from published sources to illustrate each word would require an army of readers.  Long before the internet, Murray used crowdsourcing to get the job done.  To advertise for volunteers, he created a pamphlet called, “An Appeal to the English-Speaking and English-Reading Public in Great Britain, America and the British Colonies to read books and make extracts for the Philological Society’s New English Dictionary.”  Murray distributed his pamphlet to newspapers, bookshops, and libraries.  When volunteers responded to Murray’s call, he provided them with slips of paper upon which to record their quotations along with a standard format for citing each one.  Readers sent their slips to Oxford, specifically to Murray’s office which he called the “Scriptorium.”  There Murray and his charges filed each slip alphabetically, creating an archive from which to research and document each definition.

Murray worked tirelessly as editor from 1879-1915, but unfortunately, he never lived to see the complete OED.  The original plan was to produce a four-volume dictionary in ten years, but the complete project took 44 years.  When completed in 1928, the OED encompassed twelve-volumes, containing 414,825 headwords and 1,827,306 illustrative quotations. (1).

Of course, the expansion of the English language never ends.  Today, however, with the help of the internet the process of compiling and updating the OED has become much less labor-intensive.

One reason why a comprehensive dictionary like the OED is so valuable is that it allows writers to correctly employ the words they use. The English lexicon is larger than any other language.  This is a blessing for writers, but sometimes the sheer volume of words leads to confusion between words that are similar.  This sometimes leads to hilarious malapropisms, the error of saying one word when you need another.  The term comes from Richard Brinsley Sheridan’s character Mrs. Malaprop, who appears in his play The Rivals.  The following are a couple of examples of Mrs. Malaprop’s slips of the tongue:

Illiterate [obliterate] him, I say, quite from your memory.

He can tell you the perpendiculars [particulars].

A good dictionary allows writers to check a word’s correct spelling, but also a word’s correct definition.  There are hundreds of homophones in English –words that are spelled differently but pronounced the same, such as eight and ate or there and their.  There are also other words that, although they are not homophones, are close enough in spelling, pronunciation, or meaning that they are frequently confused.  A good dictionary is an excellent source for clearing up this confusion.

Today’s Challenge:  Clearing Up the Confusion

What are some English words that so close in meaning, spelling, or pronunciation, that they are often confused?  Select a pair of these words, and research the definitions of the two words.  Write a paragraph that clearly explains the distinction between the two words based on their meanings and on how they are used in writing:

Quotation of the Day:  A word in a dictionary is very much like a car in a mammoth motorshow — full of potential but temporarily inactive. -Anthony Burgess

1-Winchester, Simon.  The Meaning of Everything:  The History of the Oxford English Dictionary.  Oxford University Press, 2003:  234.

On this date in 1995, Paul Gray wrote one of the most interesting book reviews ever written.  Writing in Time magazine, Gray was reviewing the novel A Void by the French writer Georges Perec and translated into English by Gilbert Adair.  Read the opening sentence of Gray’s review, and see if you notice what’s missing:

A Void, originally La Disparition (1969), is a lipogram, an old trick dating as far back as 500 B.C. in which authors voluntarily submit to awful handicaps, arbitrarily abjuring crucial signs or symbols and making writing, always a hard task, a virtual impossibility.

A lipogram is a word from Ancient Greek that means “leaving out a letter.”  And in case  you didn’t notice, the letter Gray leaves out of his review is the letter “e.”  Georges Perec’s complete novel A Void — all 285 pages — is a lipogram, and he doesn’t just “avoid” any letter, he avoids the single most frequently appearing letter in the French language, the letter “e” – a letter that appears in 15% of French words.

Following Perec’s achievement, translator Gilbert Adair took on the even more challenging task of translating A Void into English while at the same time maintaining its E-lessness.  This means Adair had to avoid the two most frequently used words in English, “the” and “be.”  As in French, the letter “e” is the most frequently used letter in English, appearing in 12.7% of words.

Gray clearly admires the achievements of both Perec and Adair.  In praising Adair’s work, for example, Gray says the following, while maintaining his e-less lipogram:

Adair’s translation is an astounding Anglicization of Francophonic mania, a daunting triumph of will pushing its way through imposing roadblocks to a magical country, an absurdist nirvana, of humor, pathos, and loss.

In 1972 Perec took on another form of constrained wordplay called the univocalic, a piece that uses only a single vowel (See September Seventeenth: Univocalic Day).  In the case of his novella, entitled Les Revenentes, Perec eschewed all vowels but “e.”

Mike loves his dog, Spot, but he finds it difficult to love his pet turtle, Boris. This turtle has some serious issues, including his penchant for eating Mike’s clothes.  Just last week, Mike found Boris under his bed gnawing on his brand new tennis shoes. Spot, however, is a quality canine, one that Mike can always trust.  Spot is truly man’s paramount companion, consuming only what is put in his dog bowl.

Quotation of the Day:  Sadly, a handful of critics find lipograms ridiculous, ugly or without worth (as fiction or as wordplay). To such sorry saps, I say only that constraining your thoughts and writing in a particular way aids in promoting branching paths of thought, thus amplifying vocabulary and instilling adroit linguistic skills among both young and old. By putting into praxis ways of thinking that wouldn’t occur normally, lipograms call for authors to look at writing as an activity in ways that, frankly, wouldn’t occur to such niggling adjudicators of linguistic conduct. -Steve Chrisomalis (2)