The Stoic philosopher Seneca was born in Spain in 4 B.C.  He was educated in Rome.  After achieving a prestigious position in politics as a financial clerk, his fortunes took a dark turn.  Accused of committing adultery with the emperor’s niece, he was exiled by the Roman Emperor Claudius to the island of Corsica.  Seneca’s fortunes changed eight years later when Claudius’ wife Agrippina allowed him to return to Rome as the tutor for her son and future emperor, Nero.  After working as Nero’s tutor for five years and as his aide for another ten, Seneca found himself again at the bottom of Fortune’s wheel.  After Nero uncovered a conspiracy to have him removed as emperor, he executed a purge of the people in his inner circle.  This included Seneca who was sentenced to death by suicide.  In 65 A.D., Seneca bled to death after he severed veins on his arms and legs.

Three years prior to his death — on February 5, 62 A.D. — an event occurred in Pompeii, Italy, that served as an allegory for Seneca’s view toward fortune.  Seventeen years before a volcanic eruption buried Pompeii, the city suffered a tremendously destructive earthquake. In the months following the earthquake, as inhabitants began to leave the region, Seneca commented on the futility of their actions, arguing that there is no place on earth where we are free from Fortune’s fickle finger:

Perhaps tonight or before tonight, today will split open the spot where you stand securely.  How do you know whether condition will henceforth be better in those places against which Fortune has already exhausted her strength or in those places which are supported on their own ruins? We are mistaken if we believe any part of the world is exempt and safe. . . .

Instead of moving to a different region to avoid bad fortune, Seneca had a different prescription which involves a metaphorical shifting of ground.  He called it the premeditatio malorum — or premeditation. This daily morning ritual is an exercise of the imagination where an individual contemplates what might possibly go wrong during the day ahead.  Rather than being a pessimistic, negative practice, the premeditatio is meant to build optimistic self-confidence.  In other words, we can lessen fortune’s blows by mentally anticipating and preparing for them.

What is quite unlooked for is more crushing in its effect, and unexpectedness adds to the weight of a disaster. This is a reason for ensuring that nothing ever takes us by surprise. We should project our thoughts ahead of us at every turn and have in mind every possible eventuality instead of only the usual course of events….

To illustrate the inescapability of fortune, Seneca used the metaphor of a dog tied to an unpredictable cart.  Like the cart, fortune moves capriciously.  We have degrees of freedom of movement based on the length of the leash, but once the cart begins to move, we must either move with it or be dragged by our necks.

An animal, struggling against the noose, tightens it… there is no yoke so tight that it will not hurt the animal less if it pulls with it than if it fights against it. The best alleviation for overwhelming evils is to endure and bow to necessity. (1)

Challenge – Seneca’s Sage Sayings:  Research some wise quotations by Seneca, the Younger. For example, he said, “There are more things . . . that frighten us than injure us, and we suffer more in imagination than in reality.”  Select one quotation that you think provides especially smart insights.  Quote it and follow the quotation with some commentary explaining why you like it.

On this date in 1922, the first edition of Reader’s Digest was published. The magazine was the brainchild of DeWitt Wallace, who was born in St. Paul, Minnesota in 1889.  Recovering from wounds he suffered while serving in World War I, DeWitt began working on his idea of publishing a monthly periodical featuring condensed versions of articles from other magazines. 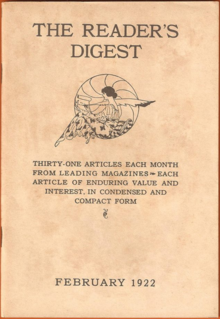 With the help of his wife Lila, Wallace published the first edition of the Reader’s Digest, producing 1,500 copies and selling each for 10 cents.  By the end of the decade, the circulation had reached more than 200,000, and in the 1930s, Wallace expanded his company to include condensed books. In addition to its smaller, condensed articles, the magazine itself is half the size of a typical magazine, just about small enough to put in your back pocket.  The circulation for Reader’s Digest, however, is not small; it has more paid subscribers than any other magazine in the world (1).

How can you paraphrase the main points of an article in 50 words?  In order to write a summary, or to digest an article by breaking it down to its essential points, you must read carefully.  The purpose of a summary is to capture the writer’s main point in your own words.  Select an article of at least 250 words, and write a 50-word summary.  Use the following step to guide you:

Step 1:  Read and annotate the text carefully, focusing on the main ideas and main details.  Underline key ideas, and circle any unfamiliar vocabulary.  Remember, the purpose of a summary is to sum-up the writer’s idea, not your reaction to the writer’s ideas.  So, resist the temptation to inject your opinion.

Step 2:  Draft a brief summary in your own words on a separate piece of paper that captures the writer’s main point or claim.  Don’t include the author and title in your summary.  Also, don’t waste words saying things like: “this article is about” or “the author argues that.”  Instead, just state the main ideas.  Don’t worry about the number of words until you have finished your draft.

Step 3:  Revise and edit your summary.  Count the number of words and revise as necessary to write the clearest summary of exactly 50 words. Read your revised draft aloud to make sure that it is clear, that the sentences are complete, and that there are no wasted words.

Quotation of the Day:  The dead carry with them to the grave in their clutched hands only that which they have given away. -Dewitt Wallace