On February 3, 1984, the song “Karma Chameleon” by the British band Culture Club hit number 1 on the Billboard Hot 100 chart.  Long before the song became popular, the chameleon had been a metaphor for a person who changes their appearance or behavior according to the situation, and as psychological research has shown, this chameleon effect can be a powerful persuader.

In another study, experimenters instructed MBA students to mirror the behavior of their partners in one-on-one negotiation sessions.  Those students who mirrored the other person reached a deal 67% of the time, while those who did not mirror, reached a deal only 12% of the time.

The explanation behind the success of the chameleon effect is explained by our natural bias for people who are similar to us.  In short, we are more likely to like a person who is like us.  Whether or not we are consciously aware of it, this liking bias makes it easier to trust and to build rapport with someone who looks, acts, or shares the same beliefs or preferences as us.  Think, for example, how many of your friendships have been formed based on the similarities you share with another person.  It doesn’t make much sense that we should be attracted more to a person who has the same birthday as us; nevertheless, can you honestly say that you wouldn’t be attracted to this person? (1).

Recall, Retrieve, Recite, Ruminate, Reflect, Reason:  What is the chameleon effect, and what insight does it provide about human nature?

Challenge – Philosophy Meets Zoology:  Philosophers have long looked to the animal kingdom for literal or figurative comparisons that help us understand the human condition.  For example, in Book II of The Republic, Plato asks us to consider the dog:

Who then can be a guardian? The image of the dog suggests an answer. For dogs are gentle to friends and fierce to strangers. Your dog is a philosopher who judges by the rule of knowing or not knowing; and philosophy, whether in man or beast, is the parent of gentleness. The human watch dogs must be philosophers or lovers of learning which will make them gentle.

What specific animal do you think has lessons for humans?  What part of the animal’s nature or behavior can we observe and learn from?

On this date in 1976, American business magnate and philanthropist Bill Gates published an “Open Letter to Hobbyists” in the Homebrew Computer Club Newsletter. 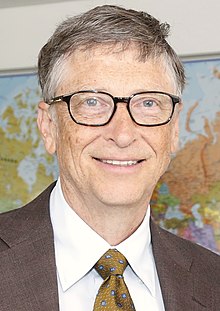 At the time Microsoft, the software company that Bill Gates founded with his friend Paul Allen, was just one year old.  The company’s revenues in its first year were a little over $16,000.  Microsoft was off to a promising start, however, having developed software for the Altair 8800 microcomputer, the first commercially successful personal computer.

The issue that sparked Gates’ open letter was one of the earliest cases of software piracy.  Gates complained in the letter that users of his Altair BASIC software, which in an era before floppy disks, was distributed on paper, were making unauthorized copies.  He implored the computer hobbyists to think about the consequences of their actions — that professional developers could not continue to stay in business if people did not pay for the product.  Gates actual words in the letter were both accusatory and sarcastic:

As the majority of hobbyists must be aware, most of you steal your software. Hardware must be paid for, but software is something to share. Who cares if the people who worked on it get paid? (1).

Although Gates’ letter didn’t result in many hobbyists paying up, Gates and his company were able to recover their losses and build a profitable company. With the launch of its first version of Windows in 1985, Microsoft was on its way to becoming one of the world’s most valuable companies.

Bill Gates’ open letter is just one of many examples of this unique genre of communications.  What makes the open letter interesting as a form is its dual audience:  the addressee and the general public.  The content of an open letter is targeted at a specific individual or group, yet the letter is published in an “open” public forum.  One of the most famous open letters ever written, Martin Luther King’s “Letter from a Birmingham Jail,” was itself written in response to another open letter.  In his letter dated April 16, 1963, King was responding to a letter published in the Birmingham Post-Herald in which eight Alabama clergymen challenge his presence in Alabama and his strategy of nonviolent resistance to racism.

Since the advent of the World Wide Web, which went public on August 6, 1991, everyone has a platform to publish their open letters.

Today’s Challenge:  Open Your Heart in an Open Letter

-An open letter to your future or past self

-An open letter to an abstract idea, a concrete object, or a place

-A humorous or satiric open letter to a group, celebrity, trend, or other idea.

Once you have your idea, write your letter.  Remember to address the specific addressee (the person or thing you’re writing to), but also consider the general audience that will be reading your letter. (Common Core Writing 1 – Argument)

Quotation of the Day:  It’s fine to celebrate success, but it is more important to heed the lessons of failure. –Bill Gates