The voice of the poem, or its persona, is Ulysses, the Latin name of the Greek hero Odysseus.  In writing this poem, Tennyson adopts the character Ulysses from Homer, the author of the Greek poems The Iliad and the Odyssey.  The Odyssey is the epic narrative that follows Ulysses’ 10-year struggle to return home after the Trojan War.  Once home on Ithaca, Ulysses faces another challenge: to outwit the suitors vying to win the hand of his wife Penelope.  Displaying brawn but also brains, Ulysses defeats the suitors in a contest, slaughters them, reunites with his wife, and once again becomes king of Ithaca. 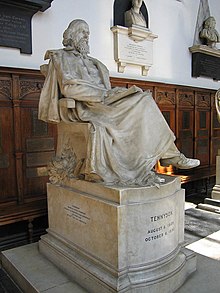 In the poem, Ulysses imagines the hero years after he has returned to the throne.  In the tradition of the dramatic monologue, we hear only the voice of the old king as he reflects on his past, on his relative idleness as King of Ithaca, and on his desire to once again set out on a bold adventure.  The understood audience of the poem is the crew of his ship, the men who will join him on his new journey.

In the poem’s opening lines, we hear the voice of a king, weary of his kingly duties on Ithaca and restless to return again to sea:

It little profits that an idle king,
By this still hearth, among these barren crags,
Matched with an aged wife, I mete and dole
Unequal laws unto a savage race,
That hoard, and sleep, and feed, and know not me.
I cannot rest from travel; I will drink
Life to the lees. All times I have enjoyed
Greatly, have suffered greatly, both with those
That loved me, and alone; on shore, and when
Through scudding drifts the rainy Hyades
Vext the dim sea. I am become a name; (1)

Willing to give up his throne to his son Telemachus and to leave his wife, Ulysses looks forward once more to bold adventures and seeing “a newer world.”  Rather than staying put and rusting, Ulysses wants “to shine in use!”  It is appropriate then that the poem ends with a string of parallel action verbs:

To strive, to seek, to find, and not to yield.

Like much of the verse of William Shakespeare, Ulysses is written in blank verse, unrhymed iambic pentameter.

What fictional character from literature or film would you adopt for a dramatic monologue?  Brainstorm some interesting characters from either books or films.  Like Tennyson did for Ulysses, imagine the life of the character after the work you know them for is over.  What would the character be thinking about and what would the character be saying — and to whom would he/she be saying it.  Write a dramatic monologue considering the speaker, the situation, the audience, and the tone.  Try to capture the distinctiveness of your character, impersonating his/her voice so that it can be understood by your reader. (Common Core Writing 3 – Narrative)