Noah Webster was born on this day in 1758 in Hartford, Connecticut. He went on to graduate from Yale and to work as a lawyer. His most noteworthy work, however, came as a school teacher. Unhappy with the curriculum materials he was given to teach, he created his own uniquely American curriculum: A three-part Grammatical Institute of the English Language. It included a spelling book, a grammar book, and a reader.

Webster served in the student militia at Yale during the Revolutionary War. He never saw combat, but while he never fought in the literal battle for independence from Britain, he was a key player in the battle to make American English independent from British English. 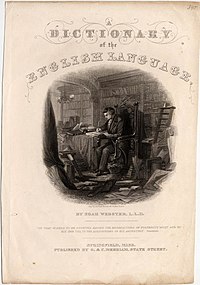 His spelling book, known as the “Blue-Backed Speller,” became one of the most popular and influential works in American history. Only the Bible sold more copies.  According to Bill Bryson in his book The Mother Tongue, Noah’s spelling book went through at least 300 editions and sold more than sixty million copies. Because of the wide use of his spelling book and his dictionary published in 1828, Webster had a significant impact on the spelling and pronunciation of American English. His dictionary contained more than 70,000 words, and it was the most complete dictionary of its time (1).

Many of the distinctive differences in spelling and pronunciation of British words versus American English words can be traced back to Webster. For example:

Change of -our to –or as in colour and color, honour and honor, labour and labor.

Change of –re to er as in centre and center, metre and meter, theatre and theater

Change of –ce to se as in defence and defense, licence and license, offence and offense

The change of the British double-L in travelled and traveller to the American traveled, traveler (2).

Not all of Webster’s spelling changes stuck, however. David Grambs, in his book Death by Spelling, lists the following as examples of words that were retracted in later editions of Webster’s Dictionary: iz, relm, mashine, yeer, bilt, tung, breth, helth, beleeve, and wimmen (3).

After Webster’s death in 1843, the rights to his dictionaries were purchased by Charles and George Merriam. The first volume of their dictionary, the Merriam-Webster Dictionary was published in 1847.

After purchasing the rights for use of the Webster name, the Merriam brothers lost a legal battle to use the name exclusively. As a result, today other dictionaries use the name Webster even though they have no connection to Webster or his original work. Because of this, Merriam-Webster includes the following assurance of quality for its dictionaries:

Other publishers may use the name Webster, but only Merriam-Webster products are backed by 150 years of accumulated knowledge and experience. The Merriam-Webster name is your assurance that a reference work carries the quality and authority of a company that has been publishing since 1831 (4).

What is your favorite word in the English language?  What kind of information can you find in a dictionary besides just the correct spellings and definitions of words?  Dictionaries tell us much more than just spelling and definitions. To celebrate Dictionary Day brainstorm a list of your favorite words.  Then, grab a good dictionary, and make a list of at least “Ten Things You Can Find in a Dictionary Besides Spelling and Definitions.” (Common Core Writing 2 – Expository)

4-Merriam-Webster. About Us – Noah Webster and America’s First Dictionary. https://www.merriam-webster.com/about-us/americas-first-dictionary.