Today is the birthday of Parson Weems (1759-1825), the man who might be called “The Father of the Father of Our Country.” It was Weems’ biography of Washington that first published the story of young George Washington and the cherry tree.

Parson Weems, also known as Mason Locke Weems, was a book agent, author, and ordained Episcopal priest.  His primary employment was as a book salesman.  When George Washington died in 1799, Weems saw an opportunity.  He thought that a biography of the venerated first president would be a big seller.  Weems published The Life of Washington in 1800, one year after Washington’s death. Excerpts of Weems’ biography were later included in the enormously popular McGuffey Readers, the most widely read elementary textbook from the mid-19th century to the mid-20th century (1). 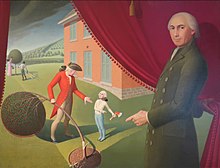 One of the excerpts included in the McGuffey Reader was Weems’ account of the cherry tree incident, an anecdote that Weems claimed he got from one of Washington’s distant relatives:

One day, in the garden, where he often amused himself hacking his mother’s pea-sticks, he unluckily tried the edge of his hatchet on the body of a beautiful young English cherry-tree, which he barked so terribly, that I don’t believe the tree ever got the better of it. The next morning [an] old gentleman, finding out what had befallen his tree, which, by the by, was a great favourite, came into the house; and with much warmth asked for the mischievous author, declaring at the same time, that he would not have taken five guineas for his tree. Nobody could tell him anything about it. Presently George and his hatchet made their appearance. “George,” said his father, “do you know who killed that beautiful little cherry tree yonder in the garden? ” This was a tough question; and George staggered under it for a moment; but quickly recovered himself: and looking at his father, with the sweet face of youth brightened with the inexpressible charm of all-conquering truth, he bravely cried out, “I can’t tell a lie, Pa; you know I can’t tell a lie. I did cut it with my hatchet.” “Run to my arms, you dearest boy,” cried his father in transports, “run to my arms; glad am I, George, that you killed my tree; for you have paid me for it a thousand fold. Such an act of heroism in my son is more worth than a thousand trees, though blossomed with silver, and their fruits of purest gold.” (2)

The historical veracity of this anecdote is questionable. Certainly by modern standards of historical research, Weems’ citation of a single distant and unnamed relative makes it dubious.  To be exact, however, we cannot call it a myth nor a total falsehood.  What we can call it is apocryphal — that is, a story that is widely circulated as true, yet is of doubtful authenticity.  The adjective derives from the Greek apokryphos, meaning “hidden or obscure.”  Another relative of the word is the Latin noun Apocrypha, a word used to identify the books excluded from the canon of the Old and New Testaments.

No doubt a part of a story’s appeal is its foundation in truth, but often we can sniff out an apocryphal story if it sounds just too good to be true.  This is the nature of stories we call legends, stories based on actual characters from history but that cannot be verified as true.  If we try to classify Meeks’ Washington story on the continuum of narrative between fact and fiction, the most accurate term would be legend.

What are the keys to creating a story that sounds believable enough to be really true?  Try your own hand at a little fact-based fiction by selecting a well-known person who is no longer living.  Think about what you know about that person’s character; then, craft an anecdote that seeks to explain a defining incident in the person’s youth that formed his or her character.  Include a plausible setting and vivid enough details to make it believable.  Share your story with some of your friends to see if they can detect any dubious details. (Common Core Writing 3 – Narrative)