On this day in 1683, a vast Ottoman army of 250,000 troops was defeated in its attempt to take Vienna, Austria.  The Austrian army was assisted by Polish forces, led by King John Sobieski, who came at the request of Pope Alexander VIII. After a battle that lasted fifteen hours, the Turks retreated, leaving behind weapons, stores of food, and thousands of their dead. After his victory, the Polish King sent a dispatch to the Pope that read, “I came, I saw, God conquered” (See July 13:  I Came, I Saw, I Conquered Day). 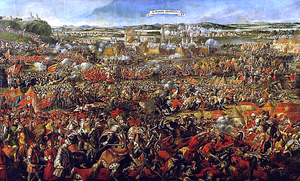 To celebrate the victory, Vienna’s bakers cooked up a new culinary creation, a crescent-shaped roll that mimicked the crescent moon on the Turkish flag.  Later, in 1770, the new roll was introduced to France when Marie Antoinette, originally of Austria, married the future Louis XVI.  Only then did the roll become the croissant, French for crescent.

A second culinary creation resulted from the large quantities of coffee left behind by the Turkish army as they fled.  Finding the coffee bitter, the Christian soldiers added milk and honey to make it more palatable.  For the name of this new concoction, they turned to a Capuchin monk named Marco d’Aviano, who had been sent by the Pope as emissary to assist the commanders of the Christian army.  The tasty drink was named Cappuccino in honor of friar Marco d’Aviano’s order, Capuchin (1).

What food combination would you argue is most worth celebrating?  Make your case for what makes your menu items so great and so complementary, and include some details from research on the history of the menu items.  Go beyond the obvious to give your reader some details about the food that goes beyond common knowledge.  Instead of baloney, serve up the best caviar to your audience. (Common Core Writing 2 – Expository)