On this day in the year 1297, the Scottish defeated the English in The Battle of Stirling Bridge.  Heavily outnumbered by English infantry and cavalry, the Scottish army led by William Wallace and Andrew de Moray nevertheless won the battle (1).

In the film Braveheart, William Wallace, portrayed by Mel Gibson, gives a rousing speech to the Scottish troops.  With the odds clearly against them, the Scottish troops are at first reluctant to fight.  Wallace challenges their reticence, asking them to think ahead to the future when they will regret that they did not fight for their freedom. They will wish for the chance to return to this spot and fight their enemy. After listening to Wallace’s succinct, clear, and forceful speech, they storm into battle. 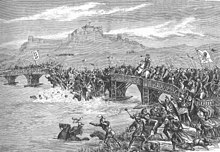 Although the film is based on actual historical events surrounding the battle, the speech itself is fictional.

Today’s Challenge:  Moving Them with a Moving Monologue

How do you motivate people to do something they may not want to do?  Write your own rousing fictional monologue based on a character who is in a situation where he or she needs to motivate an audience to act.  Begin by brainstorming some speakers and some situations, such as a son trying to persuade his father to raise his allowance, a door to door salesperson trying to persuade a homeowner to buy a security system, or a teacher trying to persuade her students to do their homework. Then, write your speech from the point of view of the speaker you have chosen, combining logic and passion to move the audience to action. (Common Core Writing 3 – Narrative)