Today is the anniversary of California’s admission as the 31st state of the Union. The discovery of gold in California in 1848 caused its population to explode, and in 1849 settlers applied for admission to the Union after drafting a state constitution that prohibited slavery. Because making California a state would upset the balance of free and slave states, statehood was delayed until September 9, 1850, when the Compromise of 1850 opened the door for California statehood. 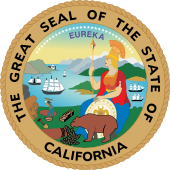 In addition to a state constitution, Californians adopted a state seal in 1849 with the motto “Eureka,” — The Greek word for “I Have Found It” — an appropriate interjection for a state whose reputation was made on gold strikes (1).

California is not the only state with a motto in a tongue other than English.  In fact, ‘English Only’ proponents might be surprised to learn that more than half of the states in the union have mottos in other languages.

Here are the statistics on the polyglot mottos:

Six states feature one-word mottos. Only one state, Vermont, has its state’s name in its motto, and Florida is the only state with the same motto as the United States of America: “In God We Trust.”

What’s your idea for a new state motto?  Generate some possible new state mottos for your home state or the other 49 states.  Host a state motto contest.  The mottos may be funny or serious, but they should all be memorable; after all, they may someday be emblazoned on a license plate.  (Common Core Language 3 – Knowledge of Language)