Today is the anniversary of the debut of the first cartoon featuring Bugs Bunny. On July 28, 1940, Warner Brothers released the animated short A Wild Hare in technicolor. The cartoon did not identify Bugs by name — that would come later — but it did premiere his catchphrase “What’s up Doc?” and his nemesis Elmer Fudd (1). 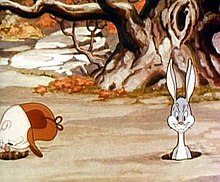 Coincidentally, it is also the birthday of Beatrix Potter, born in London in 1866.

Potter had few playmates as a child, but she did have a menagerie of pets that included a tortoise, a frog, a snake, and a rabbit. A shy, quiet girl, Potter sketched, painted, and kept a journal in which she wrote in a secret code she invented. The Tale of Peter Rabbit was published in 1902. She published numerous other animal tales, but Peter Rabbit remains the most popular (2).

All this talk about rabbits brings up the question: what is the difference between a rabbit and a hare? Well, according to Bernice Randall’s book When Is a Pig a Hog?, a hare is larger than a rabbit, with longer ears and legs; another difference is that hares live in the open, among rocks and thickets, while rabbits live in burrows.

Many words in English feature these kinds of fine distinctions, especially since English has more synonyms than any other language. This expansive lexicon is a blessing for writers, but it also demands attention to detail, since there are few truly synonymous words — that is words that can be used interchangeably regardless of context.

For example, the words lectern and podium appear to have no significant difference in meaning, but subtle distinctions in each word’s definition make them near-synonyms rather than true synonyms. A lectern refers to a stand that a speaker might use for holding notes, but it also refers to a slanted-top reading desk in a church from which the scriptures are read. Like lectern, podium is used for a speaker’s stand, but it also refers to a low platform upon which a speaker or conductor might stand.

The Tortoise and the Hare or The Turtle and the Rabbit?

In English, there is a menagerie of near-synonyms. Read the definitions below from When Is a Pig a Hog? See if you can identify which of the two animals listed fits the definition more closely.

Today’s Challenge:  Find the Fine Distinctions
What are some examples of pairs of words that are used interchangeably, such as “boat” or “ship”? Although the words are used interchangeably, what are the subtle differences between the two words?  Careful readers and writers pay attention to the fine distinctions among similar words.  For example, a boat is smaller than a ship, and a ship, unlike a boat is not powered by oars. Furthermore, a ship carries people or goods across deep water over long distances.

Select two of the words from the list below, or a closely related pair of your own.  Then, research, using a good dictionary, the definitions of both words.  Write an explanatory paragraph that gives the definitions for both words, including a clear explanation of what makes your two words different.  Your goal should be to provide your reader with a clear understanding of the similarities and differences between the two words and how the words might be used in different contexts. (Common Core Writing 2)

3 – Randall, Bernice. When Is a Pig a Hog?: A Guide to Confoundingly Related English Words. New York: Galahad Books, 1991.