Today is the anniversary of what many consider the single greatest human achievement of all time: the successful Moon mission of Apollo 11. On July 20, 1969 at 4:17 p.m. (EDT), Neil A. Armstrong became the first human to stand on the Moon. Armstrong was soon joined by Buzz Aldrin, and the two astronauts spent 21 hours on the Moon collecting 46 pounds of moon rocks before returning to the Lunar Module (1). 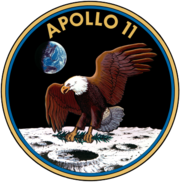 The race to the Moon that began with the launch of the Russian satellite Sputnik on October 4, 1957 was over, and the first words from a human being on the Moon were in English:

That’s one small step for a man; one giant leap for mankind.

To mark mankind’s most remarkable technological achievement, Armstrong needed to craft a message in words worthy of the moment.  To do this he turned to tried and true trick dating back the classical orators of ancient Greece and Rome.

The specific rhetorical device he used is called antithesis. As a word antithesis means “the exact opposite,” as in Love is the antithesis of hate. But as a figure of speech, antithesis juxtaposes two contrasting ideas in a balanced, parallel manner, or — as in Armstrong’s case — a contrast of degrees: small step and giant leap, and man and mankind.

We live in a world of dichotomies:  hot and cold, light and dark, tragedy and comedy, love and hate.  Antithesis is the technique of juxtaposing these opposites.  Notice, for example, how the following quotations play with contrasts and parallelism to make concise, clear, and balanced sentences:

Outside of a dog, a book is man’s best friend.  Inside of a dog it’s too dark to read anyway. -Groucho Marx

To err is human, to forgive divine.  -Alexander Pope

Using antithesis creates contrast but also brings balance, revealing the tone of someone who sees the world in all of its broad contrasts and particular opposites.  When writers use antithesis, the contrasts and opposition create a tension that keeps the reader interested.  When ideas clash, something is at stake, so there’s more reason for the reader to stick around.

What are some examples of words that are opposites — antonyms such as ‘speak’ and ‘listen,’ ‘war’ and ‘peace,’ ‘present’ and ‘past’?  Brainstorm a list of opposites, and select one pair from your list or the list below to write about:

Then, write an opening sentence featuring antitheses that makes a claim based on the differences in the two topics, such as:

Logic teach us about the world; creativity teaches us about ourselves.

Then write a short composition of at least 150 words in which you support the claim using contrast, details, examples, and evidence.

When we read, we travel to a world of imagination; when we write, we imagine a world of our own.  With reading, the words are fixed on the page for us, and although words evoke different pictures in the minds of different readers, we still are limited by the words that were selected for us by the author.  When Robert Frost, for example, describes the snow, he says, “The only sound is the sweep of easy wind and downy flake.”  Whoever reads this imagines falling snow.  When we write, however, we are in control of the words we choose and, therefore, the worlds – and the weather – we create.  We become omniscient and omnipotent.  If we choose, we can defy gravity, we can defy logic, we can defy nature.  If we choose we can create a snowstorm in August, a world where words grow on trees, where trees speak in Latin.  Reading exercises our imagination, opening our eyes to see more; writing challenges our imagination, forcing our minds to be more.