Today is the 200th anniversary of the birth of American writer, philosopher, and naturalist Henry David Thoreau. Born in 1817, Thoreau graduated from Harvard in 1837, where he studied classics and languages. 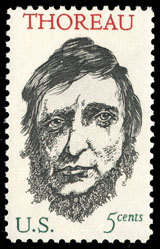 After college, he taught and traveled, but he eventually returned to his home in Concord, Massachusetts, to live with his friend Ralph Waldo Emerson, the founder and leader of the Transcendental movement.

In 1845, Henry bought a small patch of land from Emerson on Walden Pond and built a cabin. On July 4, 1845 he declared his own independence and began living there in the woods; he stayed for two years, two months, and two days.

In his classic work Walden (1854), Thoreau recounts his life in the wild and his observations about nature and about simple living:

I went to the woods because I wanted to live deliberately, to front only the essential facts of life, and see if I could not learn what it had to teach, and not, when I came to die, discover that I had not lived. I did not wish to live what was not life, living so dear; nor did I wish to practice resignation, unless it was quite necessary. I wanted to live deep and suck out all the marrow of life . . . .

In 1847 Thoreau spend one night in jail after refusing to pay his poll tax in protest against the war with Mexico (1846-1848). Based on this experience, he wrote his essay “Civil Disobedience” where he explains that individual conscience must trump governmental dictates: “Under a government which imprisons unjustly, the true place for a just man is also a prison.”

Clearly Thoreau’s thoughts and words were way ahead of his time; both Walden and “Civil Disobedience” influenced future generations in both the conservation and civil rights movements. For example, in his autobiography Martin Luther King credits Thoreau:

I became convinced that noncooperation with evil is as much a moral obligation as is cooperation with good. No other person has been more eloquent and passionate in getting this idea across than Henry David Thoreau. As a result of his writings and personal witness, we are the heirs of a legacy of creative protest.

Another disciple of Thoreau was Gandhi, who put Thoreau’s ideas regarding nonviolent resistance into action as he led India to independence (1).

Today’s Challenge:  Thorough Thinking with Thoreau
One of the prominent themes of Thoreau’s writing is the individual’s role in society.  What would you say is the key to maintaining your individuality and unique character, while at the same time living productively as a member of a society made up of groups – family, friends, and co-workers? Write your own statement on this question; then, reflect on the statements below by Thoreau.  Pick the one you agree with or disagree with the most, and explain how Thoreau’s words align or conflict with your personal philosophy:

Quotation of the Day:  It still seems to me the best youth’s companion yet written by an American, for it carries a solemn warning against the loss of one’s valuables, it advances a good argument for traveling light and trying new adventures, it rings with the power of positive adoration, it contains religious feelings without religious images, and it steadfastly refused to record bad news. –E. B. White on Walden