Today marks the anniversary of one history’s most remarkable meeting of literary minds. On the night of June 19, 1816, Lord Byron, Percy Bysshe Shelley, Mary Shelley, and Byron’s doctor and travel companion Dr. John Polidori met in a villa on the shores of Lake Geneva, Switzerland. 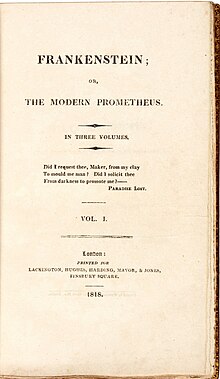 Inspired no doubt by the unseasonably stormy weather of that summer, caused by the eruption of Tambora, a volcano in Indonesia, the group gathered to read aloud from a collection of German ghost stories, called The Fantasmagoriana. These stories inspired Lord Byron to challenge each person in the group to compose a ghost story (1).

One might guess that the two established poets Byron and Shelley would battle for first place in the contest; however, it was the two members of the party without literary reputation who rose to the challenge, each creating a monster that would change literature forever.

The English Doctor, John Polidori, wrote what has come to be called the first vampire tale, a short story called “The Vampyre,” published in 1819. Although his story is not widely read today, it predates other stories in the vampire genre and is seen as the inspiration of the masters of the form: Sheridan le Fanu, Edgar Allen Poe, and, of course, Bram Stoker, the author of Dracula (2).

As far as the overall winner of the contest, based on the criteria of both influence and creativity, the award must go to Mary Shelley, whose contribution to the contest later became her novel Frankenstein (1818). In her introduction to Frankenstein, Mary credits a conversation between Byron and her husband, Shelley, as the inspiration for her story. She listened attentively as the two poets discussed Darwin’s discoveries and as they speculated about whether or not the secret of life could be found and whether or not a human corpse could be reanimated.

That evening the seeds of the poets’ conversation germinated in Mary’s mind, producing a vivid nightmare that gave her the story that would captivate readers and moviegoers for generations. In her introduction to Frankenstein, Mary Shelley describes what she saw in her nightmare:

I saw the pale student of unhallowed arts kneeling beside the thing he had put together. I saw the hideous phantasm of a man stretched out, and then, on the working of some powerful engine, show signs of life and stir with an uneasy, half-vital motion. Frightful must it be, for supremely frightful would be the effect of any human endeavor to make the stupendous mechanism of the Creator of the world. His success would terrify the artist; he would rush away from his odious handiwork, horror-stricken. He would hope that, left to itself, the slight spark of life which he had communicated would fade, that this thing which had received such imperfect animation would subside into dead matter, and he might sleep in the belief that the silence of the grave would quench forever the transient existence of the hideous corpse which he had looked upon as the cradle of life. He sleeps; but he is awakened; he opens his eyes; behold, the horrid thing stands at his bedside, opening his curtains and looking on him with yellow, watery, but speculative eyes.

As a result of Byron’s challenge, on this one fateful day, two unique literary monsters were born.

Long before Shelley and Polidori created their monsters, other monsters filled the pages of ancient myth. See if you can match up each monster below with its appropriate description. Then, challenge your family or a group of friends to create their own horror stories and monsters.

A. The many-headed snake that Hercules defeated in one of his labors.

B. The monster that Beowulf fought and killed in the Old English epic.

C. The creature with a bull’s head and a man’s body that was confined in the Labyrinth until it was killed by Theseus.

D. The Gorgon who had snakes for hair and turned anyone who looked at her into stone. She was killed by Perseus.

E. The monster with the wings and claws of a vulture and the head and body of a woman.

F. The winged monster with a woman’s head and a lion’s body. It challenged travelers with a riddle and killed them when they failed to solve it. It killed itself when Oedipus finally solved its riddle.

G. The three-headed dog who guards the entrance to Hades.

H. The race of one-eyed giants who made thunderbolts for Zeus.

What would make a good setting for a horror story?  How might you create tension and suspense at the very beginning of a scary story?  Write the opening paragraph of a tale of horror.  Start your tale with a specific setting, and use the kind of specific description that creates a mood that is appropriate to a horror story.  For inspiration, read the first paragraph of a Stephen King story or novel. (Common Core Writing 3 – Narrative)

Quotation of the Day: Everyone thinks I’m a horrible person, but I’m really not. In fact, I have the heart of a child, and I keep it in a jar on my desk. -Stephen King

1 – Woodbridge, Kim. “The Summer of 1816.” http://www.kimwoodbridge.com/maryshel/summer.shtml