On this date in 1746, Dr. Samuel Johnson, poet and critic, signed a contract with bookseller Robert Dodsley to write the first comprehensive dictionary of the English language. Johnson thought he would complete the project in three years, but the dictionary was not completed and published until April 15, 1755. 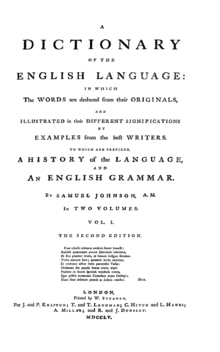 Although it took six years longer than he first estimated, it was worth the wait. The dictionary contained 40,000 words and definitions, along with 114,000 supporting quotations, and is written with precision, clarity, and wit. Johnson did for English in nine years what it had taken 40 French lexicographers 40 years to complete for the French language (1).

Here are few examples of words and definition from Johnson’s Dictionary of the English Language:

Amulet: An appended remedy, or preservative: a thing hung about the neck, or any other part of the body, for preventing or curing some particular diseases.

Lexicographer: A writer of dictionaries; a harmless drudge, that busies himself in tracing the original and detailing the signification of words.

Microscope: An optick instrument, contrived various ways to give to the eye a large appearance of many objects which could not otherwise be seen.

Zootomy: Dissection of the bodies of beasts.

In his Preface, Johnson talks about the challenges he faced in trying to harness the recalcitrant words of English:

When I took the first survey of my undertaking, I found our speech copious without order, and energetick without rules: wherever I turned my view, there was perplexity to be disentangled, and confusion to be regulated; choice was to be made out of boundless variety, without any established principle of selection; adulterations were to be detected, without a settled test of purity, and modes of expression to be rejected or received, without the suffrages of any writers of classical reputation or acknowledged authority.

Having therefore no assistance but from general grammar, I applied myself to the perusal of our writers; and noting whatever might be of use to ascertain or illustrate any word or phrase, accumulated in time the materials of a dictionary, which, by degrees, I reduced to method, establishing to myself, in the progress of the work, such rules as experience and analogy suggested to me; experience, which practice and observation were continually increasing; and analogy, which, though in some words obscure, was evident in others.

Johnson’s Dictionary of the English Language set the standard for future dictionaries. Unlike other languages like French and Italian that established academies to fix the language and prescribe how words should be used, Johnson’s approach was not to prescribe but rather to describe the language. In this way, instead of fixing the language, Johnson registered the English language by basing his definitions not solely upon his own whims, but upon the written record of centuries of writers in English. In the words of author Simon Winchester, Johnson’s method created “a whole new way of dictionary making, and an entirely new intellectual approach to the language, had been inaugurated” (2).

Johnson’s process inspired the writers of the Oxford English Dictionary, whose 10 volumes were completed in 1928. And still today English lexicographers take the descriptive approach to dictionary writing by reading all kinds of published words and recording how the meaning of words are changing and what new words are appearing.

Today’s Challenge: The Only Constant is Change

If you were writing a dictionary, what are ten words — all starting with the same letter — that you would define?  New editions of dictionaries in English are published every year because the language is constantly changing. Because of this change, some of the words from Johnson’s Dictionary have very different definitions today than they did in 1755. Visit the online edition of Johnson’s Dictionary, and select five unfamiliar words.  Record the parts of speech and definitions of the words.  (Common Core Language – 4)

Quotation of the Day: At painful times, when composition is impossible and reading is not enough, grammars and dictionaries are excellent for distraction. -Elizabeth Barrett Browning

2 -Winchester, Simon. The Meaning of Everything: The Story of the Oxford English Dictionary. Oxford: Oxford University Press, 2003.