Today is Flag Day.  On this day in 1954 the words “under God” were added to the Pledge of Allegiance. 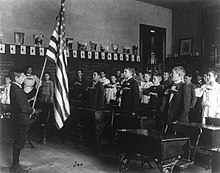 The first Pledge of Allegiance was written by Francis M. Bellamy, a writer for The Youth’s Companion magazine. It was officially unveiled on October 19, 1892, the opening day of the World’s Columbian Exposition. On that day teachers across the nation read a proclamation by President McKinley and children practiced the pledge, putting their right hands over their hearts with their palms facing down.

The original pledge read as follows:

I pledge allegiance to my flag and to the Republic for which it stands one nation, indivisible, with liberty and justice for all.

On Flag Day in 1923, the pledge was revised by the National Flag Code Committee, eliminating the words “my flag” and replacing them with the words “the flag of the United States.”

I pledge allegiance to the flag of the United States and to the Republic for which it stands one nation, indivisible, with liberty and justice for all.

Another change in the pledge was made for Flag Day in 1924 when the committee added the words “of America.”

The final change was made on the same day in 1954 when President Eisenhower established Flag Day. On that day the words “under God” were added.

I pledge allegiance to the flag of the United States of America and to the Republic for which it stands one nation, under God, indivisible, with liberty and justice for all.

There are subtle differences between the words pledge, oath, and vow. The three definitions below are from the American Heritage College Dictionary:

Pledge: A solemn binding promise to do, give, or refrain from doing something.

Oath: A solemn formal declaration or promise, often calling on God or a sacred object as witness.

Vow: An earnest promise to perform a specified act or behave in a certain manner, especially a promise to live by the rules of a religious order.

Read the excerpts below from historic pledges, oaths, and vows. See if you can identify any.

In the 1987 edition of The English Journal, R. D. Walshe published a Learning Pledge for students of writing:

I PROMISE throughout this day’s learning to handle with respect and pleasure humanity’s greatest invention, language, and in particular, when I reach for a pen or sit at a computer, to remember that I am about to use humanity’s second greatest invention, writing, with which I will take language from the invisible mind and make it visible on paper where I can work on it with full attention until it becomes the best thinking, the best learning, of which I am capable (2).

Select a single activity or skill that you think is worth pledging your passion and devotion to.  Use Walshe’s Learning Pledge as a model, and write the words of a pledge that might be recited by people who are devoting to participating in this activity or practicing this skill.  (Common Core Writing 2 – Expository)

Quotation of the Day: I also wish that the Pledge of Allegiance were directed at the Constitution and the Bill of Rights, as it is when the President takes his oath of office, rather than to the flag and the nation. –Carl Sagan

1- Burrell, Brian. The Words We Live By: The Creeds, Mottoes, and Pledges That Have Shaped America. New York: The Free Press, 1997.