On this day in 1789, a draft of the Bill of Rights was presented to the First Federal Congress. The United States Constitution had been ratified on September 17, 1787. It established the organization of the central government and the elaborate system of checks and balances on the power of the three branches. What was not included in the Constitution at this time, however, was how the powers of the central government should be balanced against the rights and liberty of the people. 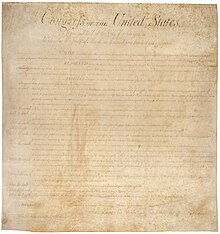 Beginning with the Magna Carta, signed by King John on June 15, 1215, there is a long history of attempts to balance the power of the state or the Crown against the power of the individual. The Bill of Rights is a high water mark in this history.

Credit for championing the draft of the Bill of Rights goes to James Madison, who would later become the fourth President of the United States. Madison had been the major architect of the document that was written at the 1787 Constitutional Convention in Philadelphia, and in 1789 he demonstrated the same breadth of knowledge and the same skill in forming compromises as he argued for the Bill of Rights.

Madison’s first draft of 17 amendments was approved by the House of Representatives, but 5 of the amendments were later shot down by the Senate. The state legislatures would later remove two more amendments. The first 10 amendments to the U.S. Constitution known as the Bill of Rights were finally adopted on December 15, 1791.

Amendment I – Freedom of Religion, Speech, Press, Assembly, and Petition

Congress shall make no law respecting an establishment of religion, or prohibiting the free exercise thereof; or abridging the freedom of speech, or of the press; or the right of the people peaceably to assemble, and to petition the government for a redress of grievances.

A well-regulated militia, being necessary to the security of a free state, the right of the people to keep and bear arms, shall not be infringed.

No soldier shall, in time of peace be quartered in any house, without the consent of the owner, nor in time of war, but in a manner to be prescribed by law.

The right of the people to be secure in their persons, houses, papers, and effects, against unreasonable searches and seizures, shall not be violated, and no warrants shall issue, but upon probable cause, supported by oath or affirmation, and particularly describing the place to be searched, and the persons or things to be seized.

Amendment V – Right of the Accused

No person shall be held to answer for a capital, or otherwise infamous crime, unless on a presentment or indictment of a grand jury, except in cases arising in the land or naval forces, or in the militia, when in actual service in time of war or public danger; nor shall any person be subject for the same offense to be twice put in jeopardy of life or limb; nor shall be compelled in any criminal case to be a witness against himself, nor be deprived of life, liberty, or property, without due process of law; nor shall private property be taken for public use, without just compensation.

In all criminal prosecutions, the accused shall enjoy the right to a speedy and public trial, by an impartial jury of the state and district wherein the crime shall have been committed, which district shall have been previously ascertained by law, and to be informed of the nature and cause of the accusation; to be confronted with the witnesses against him; to have compulsory process for obtaining witnesses in his favor, and to have the assistance of counsel for his defense.

In suits at common law, where the value in controversy shall exceed twenty dollars, the right of trial by jury shall be preserved, and no fact tried by a jury, shall be otherwise reexamined in any court of the United States, than according to the rules of the common law.

Excessive bail shall not be required, nor excessive fines imposed, nor cruel and unusual punishments inflicted.

The enumeration in the Constitution, of certain rights, shall not be construed to deny or disparage others retained by the people.

Amendment X – Lawsuits Against a State

The powers not delegated to the United States by the Constitution, nor prohibited by it to the states, are reserved to the states respectively, or to the people.

Quotation of the Day: If we can’t think for ourselves, if we’re unwilling to question authority, then we’re just putty in the hands of those in power. But if the citizens are educated and form their own opinions, then those in power work for us. In every country, we should be teaching our children the scientific method and the reasons for a Bill of Rights. With it comes a certain decency, humility and community spirit. In the demon-haunted world that we inhabit by virtue of being human, this may be all that stands between us and the enveloping darkness. -Carl Sagan