On this day in 1955, the quiz show the $64,000 Question premiered on CBS. Today we take game shows for granted, but in the early days of television these “quiz shows” were high stakes dramas that mesmerized the television audience and posted record ratings. The $64,000 Question spawned a number of successful imitators: The Big Surprise, Dotto, Tic Tac Dough, and Twenty One. 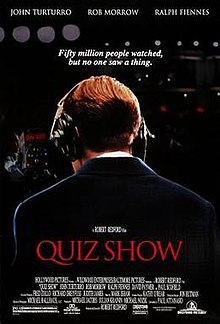 The success of the quiz shows ended, however, in 1958 when a scandal surfaced where evidence showed that the results of the shows were rigged. As a result, the quiz show craze died, and the networks stopped airing game shows (1). Game shows did not gain favor with the public again until the 1960s when shows like Jeopardy began to attract viewers (See March 20: Answer in the Form of a Question Day). In fact, it was not until the ’60s that the term game show replaced quiz show.

It is interesting that tracking down the history of the word quiz has left lexicographers somewhat quizzical.

One story involves James Daly, a theater manager in Dublin. In 1791, Daly supposedly made a bet with a friend, saying he could introduce a new word into the language within a single day. He then created the nonce (or nonsense) word quiz and paid people to write the word in chalk on walls throughout the city. By the end of the day, the word was on everyone’s lips (2).

Although this is a good story, it probably is not true. Instead, quiz is probably just a clipped version of the word inquisitive, an adjective meaning “unduly curious and inquiring.”

Quotation of the Day:  There is always a place I can take someone’s curiosity and land where they end up enlightened when we’re done. That’s my challenge as an educator. No one is dumb who is curious. The people who don’t ask questions remain clueless throughout their lives. –Neil deGrasse Tyson

1- The Museum of Broadcast Communications: