On this day in 1944, the largest invasion in history began as the Allied armies assaulted the beaches of Normandy, France with 133,000 soldiers from England, Canada, and the United States. The war in Europe would not end until nearly one year after D-Day, but without a successful invasion on June 6th, the progress of the war and the final outcome certainly would have been different. As a result, if you were to talk about the single most influential day or moment in the 20th century, you would be hard-pressed to find any more faithful day than June 6, 1944. 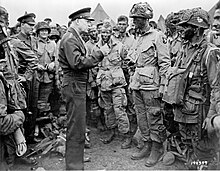 On the morning of June 6, the Supreme Commander of the Allied Expeditionary Forces General Dwight D. Eisenhower delivered the following “Order of the Day” to the Allied forces as they awaited their appointment with history:

Soldiers, Sailors and Airmen of the Allied Expeditionary Forces: You are about to embark upon the Great Crusade, toward which we have striven these many months. The eyes of the world are upon you. The hopes and prayers of liberty-loving people everywhere march with you. In company with our brave Allies and brothers-in-arms on other Fronts you will bring about the destruction of the German war machine, the elimination of Nazi tyranny over oppressed peoples of Europe, and security for ourselves in a free world.

Your task will not be an easy one. Your enemy is well trained, well equipped and battle-hardened. He will fight savagely.

But this is the year 1944! Much has happened since the Nazi triumphs of 1940-41. The United Nations have inflicted upon the Germans great defeats, in open battle, man-to-man. Our air offensive has seriously reduced their strength in the air and their capacity to wage war on the ground. Our Home Fronts have given us an overwhelming superiority in weapons and munitions of war, and placed at our disposal great reserves of trained fighting men. The tide has turned! The free men of the world are marching together to Victory!

I have full confidence in your courage, devotion to duty and skill in battle. We will accept nothing less than full victory!

Good Luck! And let us all beseech the blessing of Almighty God upon this great and noble undertaking. (1)

Thousands of copies of Eisenhower’s message were printed on small enough pieces of paper that soldiers could keep them in their wallets or breast pockets (2).

Like the Gettysburg Address, which was only 272 words, Eisenhower wrote a concise message of only 238 words.  In language that was forceful, honest, and direct, he clearly presented the mission and its importance to each soldier, sailor, and airman.

Our landings in the Cherbourg-Havre area have failed to gain a satisfactory foothold and I have withdrawn the troops. My decision to attack at this time and place was based upon the best information available. The troops, the air and the Navy did all that Bravery and devotion to duty could do. If any blame or fault attaches to the attempt it is mine alone (3).

The term D-Day was a general military term that referred to the day which a combined attack would take place, especially when that day needed to be kept secret.  Because of the enormous size and success of the Normandy assault, however, today we see D-Day as synonymous with June 6, 1944.

-A teacher speaking to a class about how to succeed on the final test.

-A coach speaking to his or her team about how to win a big game.

-A manager talking to his or her sales team about how to break sales records for the month.

A band leader talking to his or her group about how to play the best gig ever.

-A mayor talking to town citizens about how to make their town great.

Quotation of the Day: Leadership is the art of getting someone else to do something you want done because he wants to do it. -Dwight D. Eisenhower