Today is the birthday of Rick Riordan, the bestselling author of the Percy Jackson and the Olympians series.  An award-winning author of mysteries for adults, Riordan’s great success as a children’s author began at the bedside of his son.  When his son requested a bedtime story from Greek Mythology, Riordan, a former middle school teacher, was more than willing to share some stories about gods and heroes.  Riordan’s major breakthrough happened when he ran out of material. His son asked him to make up some new stories with the same characters. 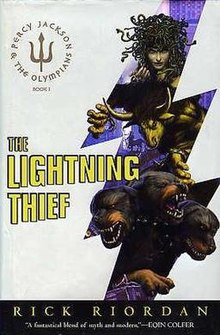 In addition to the familiar characters from Greek mythology, there is one conspicuously new character:  Percy Jackson, a 12-year old demigod with dyslexia and ADHD.

A 2007 study entitled “Reading Across the Nation” found that under half of parents surveyed in the U.S. read every day to their children.  The study tracked results by state. The highest scoring state was Vermont, where 67% of respondents claimed to read to children daily; the lowest scoring state was Mississippi with 38%.

The results of the “Reading Across the Nation” study are distressing.  The nightly bedtime story ritual is more than just a time for preparing children to sleep; it’s an essential part of preparing them for a lifetime of literacy.  The study’s authors state the following:

Reading aloud is the single most important activity for building the knowledge required for eventual success in reading. Early language skills, the foundation for later reading ability, are based primarily on language exposure and human interaction – parents and other adults talking to young children. The more words parents use when speaking to an eight-month-old infant, the greater the size of the child’s vocabulary at age three (2).

Today’s Challenge:  Tell Me a Story

Which mythological characters do you think have the most dramatic stories?  Brainstorm some memorable characters from mythology.  Research their background and stories. Then, using your own words, tell a single story about your featured character aimed at a young audience.  Remember to include the essential story elements, such as dialogue, setting, conflict, climax, and resolution. (Common Core Writing 3 – Narrative)