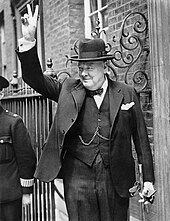 In the final paragraph, or preoration, of his speech, Churchill unleashed one of history’s most dramatic finishes:

We shall fight on the seas and oceans,

we shall fight with growing confidence and growing strength in the air,

we shall defend our island, whatever the cost may be.

We shall fight on the beaches,

we shall fight on the landing grounds,

we shall fight in the fields and in the streets,

we shall fight in the hills;

There’s a fine line between repetition and redundancy, but as demonstrated by Churchill, when employed at the right time and at the right place, repetition can create the kind of dramatic emphasis that rolls and resonates like ocean waves repeatedly crashing on the rocky shore.  Churchill, a master of rhetoric, knew what he was doing. He knew just when and just where to employ this echo effect for maximum impact.

Another element of Churchill’s mastery is his use of succinct, simple language.  As he explains in his “Scaffolding of Rhetoric,” published when he was 23 years old:

The shorter words of a language are usually the more ancient. Their meaning is more ingrained in the national character and they appeal with greater force to simple understandings than words recently introduced from the Latin and the Greek. All the speeches of great English rhetoricians–except when addressing highly cultured audiences–display a uniform preference for short, homely words of common usage–so long as such words can fully express their thoughts and feelings…

Today’s Challenge:  You Can Say That Again

Some of the best-known sayings, expression, titles, and aphorisms in the English language use repetition for effect:

No pain, no gain

United we stand, divided we fall

Put up or shut up

What are some examples of great quotations that repeat at least one significant word?  What would you say is the best thing ever said with repetition? Read the quotations below as examples; then, research a quotation that you think is particularly well stated.  In addition to presenting the quotation and the name of the speaker, explain why you like the quotation based on both what it says and how it says it.

Some are born great, some achieve greatness, and some have greatness thrust upon them. -William Shakespeare

There are two great days in a person’s life – the day we are born and the day we discover why. -William Barclay

When a person can no longer laugh at himself, it is time for others to laugh at him. -Thomas Szasz

Quotation of the Day:  Repetition is based on body rhythms, so we identify with the heartbeat, or with walking, or with breathing. -Karlheinz Stockhausen