On the evening of May 10, 1933, Students on 34 campuses across Germany gathered to burn books that were deemed “un-German.”  The book burnings were one of several of the actions the Nazi party took in the years leading up to World War II to bring German arts and culture in line with Nazi goals. 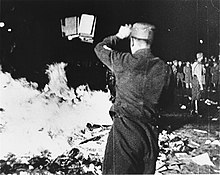 In Berlin, where over 40,000 students and Nazi officials gathered, Joseph Goebbels, the Nazi minister of propaganda, delivered a scathing speech denouncing the decadence and moral corruption found in the unwanted books.

Any book expressing ideas that in any way ran counter to Nazi ideologies was deemed fit for incineration.  The following is a small sample of some of the authors whose books were burned: Thomas Mann, Erich Maria Remarque, Karl Marx, Bertolt Brecht, Ernest Hemingway, Jack London, Theodore Dreiser, and Helen Keller.

Also burned on May 10th were works by the German Jewish poet Heinrich Heine, whose words foreshadowed the horror to come:  “Where they burn books, they will also ultimately burn people” (1).

Germany, of course, is not the only place where there have been book burnings.  In 1973, Charles McCarthy, Chairman of a school board in North Dakota had copies of Kurt Vonnegut’s novel Slaughterhouse-Five burned because of its “obscene language.”  Fortunately, many denounced the book burning, including the book’s author who sent a letter to McCarthy, saying the following:

I read in the newspaper that your community is mystified by the outcry from all over the country about what you have done. Well, you have discovered that Drake is a part of American civilization, and your fellow Americans can’t stand it that you have behaved in such an uncivilized way. Perhaps you will learn from this that books are sacred to free men for very good reasons and that wars have been fought against nations which hate books and burn them. If you are an American, you must allow all ideas to circulate freely in your community, not merely your own.

Each September since 1982, the American Library Association has sponsored Banned Books Week, a national campaign that promotes the freedom to read and that celebrates a diversity of ideas, even those that are unorthodox or unpopular.  Activities during the week include public readings, panel discussions, and even a teen fashion show where designers display original fashion inspired by challenged or banned books (3).

Today’s Challenge:   Only You Can Prevent Book Burning

The following are examples of books that have been banned or challenged:

All Quiet on the Western Front by Erich Maria Remarque

The Grapes of Wrath by John Steinbeck

The Rights of Man by Thomas Paine

The Adventures of Huckleberry Finn by Mark Twain

To Kill a Mockingbird by Harper Lee

Quotation of the Day:  You don’t have to burn books to destroy a culture. Just get people to stop reading them. -Ray Bradbury