Today is the birthday of poet Robert Browning. Born in Camberwell, England in 1812, Browning was exposed to books at a young age. His father owned a collection of some 6,000 rare volumes, and Browning learned to share his father’s passion for literature, reading books in Greek, Hebrew, Latin, French, Italian, and Spanish. 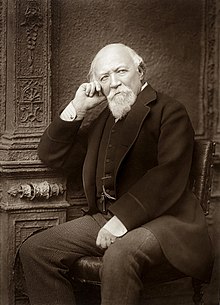 Browning wrote both poetry and drama, and his most influential innovation, the dramatic monologue, combined both.

The dramatic monologue is characterized as a poem with a single speaker with an implied listener or audience. The speaker is not the poet; instead, the poet takes on the persona (Latin for “mask’) of an imaginary character and brings that character alive solely through the words spoken.  A specific dramatic situation is important in the poem, as well as a tone that captures both the voice and the character of the speaker.

Perhaps the greatest of all dramatic monologues was one written by Browning in 1842 called “My Last Duchess.”  In the poem, set during the Italian Renaissance, Browning speaks in the persona of an arrogant, cold, and controlling duke who is in the process of negotiating the dowry for his next marriage.  Taking a break from the negotiations, he gives a tour to one of his future father-in-law’s envoys. The major focus of the duke’s remarks is on a portrait of his deceased wife, his “last duchess,” which he shows the envoy.  The major criticism he had with this duchess, as he explains to the envoy, is that she had “A heart . . . too soon made glad,/Too easily impressed.” Because she did not make her husband the sole focus of her universe and because she allowed herself to be moved by other persons and other things than her husband, he “gave commands” –a suggestion that he had her killed to open the door of opportunity for a new, less disagreeable wife.

My Last Duchess by Robert Browning

That’s my last Duchess painted on the wall,
Looking as if she were alive. I call
That piece a wonder, now: Frà Pandolf’s hands
Worked busily a day, and there she stands.
Will ‘t please you sit and look at her? I said
‘Frà Pandolf’ by design, for never read
Strangers like you that pictured countenance,
The depth and passion of its earnest glance,
But to myself they turned (since none puts by
The curtain I have drawn for you, but I)
And seemed as they would ask me, if they durst,
How such a glance came there; so, not the first
Are you to turn and ask thus. Sir, ‘t was not
Her husband’s presence only, called that spot
Of joy into the Duchess’ cheek: perhaps
Frà Pandolf chanced to say, ‘Her mantle laps
Over my lady’s wrist too much,’ or ‘Paint
Must never hope to reproduce the faint
Half-flush that dies along her throat:’ such stuff
Was courtesy, she thought, and cause enough
For calling up that spot of joy. She had
A heart—how shall I say?—too soon made glad,
Too easily impressed; she liked whate’er
She looked on, and her looks went everywhere.
Sir, ‘t was all one! My favour at her breast,
The dropping of the daylight in the West,
The bough of cherries some officious fool
Broke in the orchard for her, the white mule
She rode with round the terrace—all and each
Would draw from her alike the approving speech,
Or blush, at least. She thanked men,—good! but thanked
Somehow—I know not how—as if she ranked
My gift of a nine-hundred-years-old name
With anybody’s gift. Who’d stoop to blame
This sort of trifling? Even had you skill
In speech—(which I have not)—to make your will
Quite clear to such an one, and say, ‘Just this
Or that in you disgusts me; here you miss,
Or there exceed the mark’—and if she let
Herself be lessoned so, nor plainly set
Her wits to yours, forsooth, and made excuse,
—E’en then would be some stooping; and I choose
Never to stoop. Oh, sir, she smiled, no doubt,
Whene’er I passed her; but who passed without
Much the same smile? This grew; I gave commands;
Then all smiles stopped together. There she stands
As if alive. Will ‘t please you rise? We’ll meet
The company below then. I repeat,
The Count your master’s known munificence
Is ample warrant that no just pretence
Of mine for dowry will be disallowed;
Though his fair daughter’s self, as I avowed
At starting, is my object. Nay, we’ll go
Together down, sir. Notice Neptune, though,
Taming a sea-horse, thought a rarity,
Which Claus of Innsbruck cast in bronze for me!

Today’s Challenge:  Grab Your Mask and Your Poetic License

What are some examples of dramatic situations a person might be in that would produce a dramatic monologue?  Try your hand at writing your own dramatic monologue. You can try to write it in verse if you want, but more importantly, try to capture the authentic voice of your narrator. In a dramatic monologue you can take on the voice of ANYONE, or anything, you desire. In other words, you take on a persona and use your poetic license to channel the voice of whomever you wish.

Before you commit to a single idea, do some brainstorming on possible combinations of the four elements. You can go for comedy or tragedy — a really good dramatic monologue might have elements of both.

Here are some examples:

Below is an example based on #6, with apologies to Rudyard Kipling:

HOW YOUR RACE IS RUN

Step up to the starting line, and stare down your fears

Be ready for the gun as you start the race

Get out at a good strong pace

Don’t let the pack box you in.

Run your own race to win.

Whether you win or lose the race my son,

Will you run your race to win?

And when you fall down will pick yourself back up again?

You’ve  gotta make your own breaks in this human race

Three fingers pointing back in your face

You can’t stop the sun, but you can make him run.

Triumph and disaster are two imposters just the same,

Don’t spend your time looking for someone to blame.

Because the rain comes down and the way gets hard,

And it seems like you haven’t gotten very far

Push beyond the pain

Through the mud and the rain

Whether you win or lose the race my son

Try to see the world in your neighbor’s shoes

And whether you win or you lose

Do all you can to lend a helping hand

Pray to God each day

That He’ll light your way

Whether you win or lose the race my son

Quotation of the Day: Ah, but a man’s reach should exceed his grasp – or what’s a heaven for? -Robert Browning