On this day in 1971, the song “Bridge Over Troubled Water,” a song by the American folk-rock duo Simon and Garfunkel, won Song of the Year and Record of the Year at the 13th Grammy Awards held in Los Angeles, California.*  The song was a number one hit on the Billboard Hot 100 for six weeks and has been covered by over 50 artists, including Elvis Presley and Aretha Franklin. 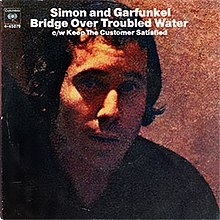 The duo, made up of singer-songwriter Paul Simon and vocalist Art Garfunkel, met as children in Queens, New York.  Simon and Garfunkel were the most successful duo in popular music in the 1960s and were elected to the Rock and Roll Hall of Fame in 1990.

“Bridge Over Troubled Water,” written by Paul Simon, is a tribute to friendship, employing the simile, “Like a bridge over troubled water” as a vivid image of dedication and devotion.

The song’s opening lyrics are as follows:

When tears are in your eyes, I’ll dry them all

I’m on your side, oh, when times get rough

And friends just can’t be found

I will lay me down

The simile is a rhetorical device that employs figurative language to create vivid imagery.  Unlike a metaphor, which says that one thing “is” another thing (as in “Juliet is the sun”), a simile uses the words “like” or “as” to admit that it’s a comparison.  In the words of author James Geary, “a simile is just a metaphor with the scaffolding still up” (2).

An easy way to remember the key characteristic of similes is to look at its Latin root similis, which is the same root from which we get the word “similar” meaning “like.”  Because similes use “like” or “as” they are more explicitly stated. Metaphors employ subtler comparisons.  In the words of poet and essayist Jane Hirshfield, “Similes make you think; metaphors make you feel.” Both devices share one key characteristic:  they build a bridge between the abstract and the concrete, allowing writers to employ fresh images.

The following are three examples on the topic of friendship:

True friendship is like sound health; the value of it is seldom known until it is lost. -Charles Caleb Colton

Love is like the wild rose-briar; Friendship like the holly-tree. The holly is dark when the rose-briar blooms, but which will bloom most constantly? -Emily Bronte

Once you have recorded your three similes, decide which one you like best and explain your decision.  Once you have critiqued your favorite similes on your subject, try your hand at crafting your own original simile by pairing your abstract idea with a vivid image that brings the abstract to life.

Friendship is like a fire that stays aflame only through constant attention.

Quotation of the Day:  Teaching school is like having jumper cables hooked to your brain, draining all the juice out of you. -Stephen King

2-Geary, James. I Is an Other:  The Secret Life of Metaphor and How It Shapes the Way We See the World.  New York:  HarperCollins, 2011.