On this day in 1876, Alexander Graham Bell uttered the first words ever spoken on the telephone.

Born in Scotland, Bell immigrated first to Canada and then to Boston, Massachusetts, where he opened a school for teachers of the deaf.  Long distance communication became a reality in the 1830s with the invention of the telegraph, but messages could only be transmitted in Morse code.  Bell’s vision was to transmit the human voice over a wire. To help make his vision a reality, Bell hired Thomas Watson, an electrical designer and mechanic. 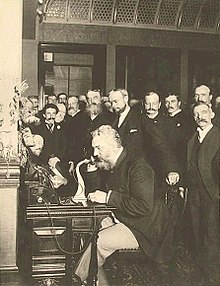 While working on a transmitter in his laboratory on March 10, 1876, Bell spilled battery acid on his clothes.  He called out: “Mr. Watson, come here! I want you!” Watson rushed excitedly from the other room, reporting that he heard Bell’s voice coming from the transmitter.  Without realizing it, Bell had just made the first telephone call.

Bell offered to sell his invention to Western Union for $100,000.  Western Union’s president, however, failed to see how Bell’s invention could ever become more popular than the telegraph.  Within two years the telephone was worth more than $25 million, and Alexander launched his Bell Telephone Company, which would become one of the world’s largest corporations (1).

Today when we make a telephone call, we take for granted that the person on the other end of the line will answer with “hello.”  The truth is, however, that when the first telephones were put into service, people were not sure what to say to initiate the conversation.  Bell suggested the nautical greeting “Ahoy,” the word he used for the rest of his life. His rival, Thomas Edison, who made improvements on Bell’s invention, suggested “hello,” a word that previously had been used more as an exclamation of surprise rather than a synonym for “hi.”  Edison won the war of words in the long run, primarily because the first telephone books suggested “hello” as the officially sanctioned greeting (2).

In addition to the telephone, Bell is also credited with another noteworthy invention, the metal detector.  After President James A. Garfield was shot by an assassin on July 2, 1881, Bell invented a metal detector to help doctors locate the bullet.  Unfortunately, the bullet was never found because the metal bed springs from Garfield’s bed rendered Bell’s metal detector useless. Garfield died from infection from his wound on September 19, 1881.

What are some possible dramatic situations that would involve dialogue between two characters?  Craft a short story or anecdote entirely of dialogue.  Use no narration and no tag lines to identify speakers.  Use a title to clue your reader into the context of your story, and skip lines between each line of dialogue.  (Common Core Writing 3 – Narrative)

Darth and Luke on Christmas Morning

Luke, let’s gather around the Christmas tree and open some gifts.

Here’s two nicely wrapped ones for you.  The tags say they’re from Yoda. I bet one’s a new lightsaber and the other is fruitcake.

Wow, you’re right Dad!  A new lightsaber and a fruit cake!  How did you know?

I felt your presents.

Quotation of the Day:  Concentrate all your thoughts upon the work at hand. The sun’s rays do not burn until brought to a focus.  -Alexander Graham Bell