Today is the birthday of the American writer John McPhee, who was born in Princeton, New Jersey in 1931. 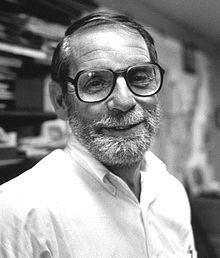 McPhee first wrote professionally for television, writing plays for NBC in the 1950s. After working at NBC, McPhee wrote for Time magazine about show business.  McPhee’s major ambition, however, was to write for the great literary magazine The New Yorker.  He submitted stories for 14 years and received nothing in return except rejections slips.  Finally, in 1965, McPhee received a call from an editor at The New Yorker offering to buy one of his stories.

The story was a profile of the college basketball star and Rhodes Scholar Bill Bradley (and future United States Senator).  McPhee’s father, who was the team doctor for Princeton’s basketball team, had introduced McPhee to Bradley’s story. McPhee went on to become a staff writer for The New Yorker and an author of more than thirty books.  He has written on a vast array of topics, including Alaska, the Swiss Army, the atom bomb, Russian art, fishing, and geology.  He even wrote an entire book about oranges. McPhee won the Pulitzer Prize for nonfiction in 1999 for his book Annals of the Former World, a survey of North American geology.

McPhee’s first story in The New Yorker, his profile of Bill Bradley, was expanded into his first book A Sense of Where You Are, published in 1965.

A profile is a specific type of feature story in journalism that focuses on a person.  Like a painted portrait, a profile attempts to capture the unique character, spirit, and personality of its subject. In addition to trying to capture what makes the person tick, the profile also should give the audience an angle — some aspect of the person’s personal or professional life that makes him or her relevant, interesting, or important to society as a whole.

A prerequisite for any good profile is an in-depth interview of the profile’s principal subject.  And prior to an interview, the interviewer should craft specific questions that will get at the kinds of specific details that will be needed to write a good profile. What are some examples of questions you can ask a person you don’t know that will help you get to know about the individual’s unique story and unique personality?   Write a list of 20 interview questions that you could ask any stranger that would help you get to know that person.  Aim for questions that will get at the person’s individual character and his or her unique story. (Common Core Writing 2 – Expository)

Quotation of the Day:  Certainly the aural part of writing is a big, big thing to me. I can’t stand a sentence until it sounds right, and I’ll go over it again and again . . . I read aloud so I can hear if it’s fitting together or not. It’s just as much a part of the composition as going out and buying a ream of paper. -John McPhee