On this date in 1889 the Unites States battleship Maine exploded while harbored in Havana, Cuba, killing 260 of the 400 sailors aboard.  The Maine had been sent to protect American interests when a Cuban revolt broke out against Spanish rule.  Although no clear cause for the explosion was proven definitively, a U.S. Naval Court of inquiry at the time placed the blame on a Spanish mine. 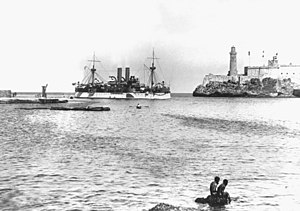 Although he was initially against war with Spain, President William McKinley faced enormous public pressure to go to war.  The yellow journalism of William Randolph Hearst inflamed American resentment against Spain, and cries of “Remember the Maine” increased tensions.  Finally in April 1889, the U.S. declared war on Spain.

The Spanish-American war lasted just five months.  Spain was not prepared to fight a distant war and was easily routed by the U.S.  As a result of the brief war, the U.S. acquired Puerto Rico, Guam, the Philippines, as well as temporary control of Cuba (1).

In 1976 an investigation into the explosion of the Maine by U.S. Navy Admiral Hyman Rickover cleared the Spanish.  Rickover concluded that the explosion was caused by spontaneous combustion in the ship’s coal bins (2).

“Remember the Maine” is one of the more memorable slogans of history.  Like “Remember the Alamo” before it and “Remember Pearl Harbor” after it, these slogans remind us that slogans are not just about advertising a product; instead, they are about getting people to do something:  buy a product, vote for a candidate, or take arms against an enemy in war.  In fact, the etymology of slogan is from the Gaelic sluagh-ghairm, meaning “army-shout” or “battle cry” (3).

“Remember the Maine” features two principles that make it stick in the mind.  First, it is stated as an imperative sentence; second, it is clear and concise.  Nothing arrests the attention like a short imperative sentence.  Stated as a command, an imperative sentence like “Remember the Maine” doesn’t need to waste time stating a subject; instead, the slogan begins with a verb that acts like the blast of a starting gun telling us to “Go!”  In addition to being a call to action or a call to arms, great slogans make every word count.  They are micro-messages, and the fewer the words, the greater they stick.

For more proof the effectiveness of the concise imperative slogan, read the examples below — each one with no more than six words:

Have it your way

Say it with Flowers

Don’t Leave Home Without It

Twist the cap to refreshment

Reach Out and touch someone

Put a Tiger in Your Tank

What is an existing product or cause that you would be willing to promote?  Brainstorm some products, causes, and some original imperative slogans.  When you have found one that works, write a brief letter to the company or to someone representing the cause, and make your pitch for your slogan.  Why do you think it works and should be used to promote the product/cause?  Make your case. (Common Core Writing 1 – Argument)

Quotation of the Day:  The slogan ‘press on’ has solved and always will solve the problems of the human race. -Calvin Coolidge