Today is the birthday of the Polish writer Joseph Conrad.  Born in 1857, Conrad did not learn to speak and write English until he was in his twenties.  Despite the fact that English was his second language, Conrad is considered one of the greatest novelists in the English language.  A master prose stylist, Conrad influenced numerous writers, including Ernest Hemingway, F. Scott Fitzgerald, and D.H. Lawrence. 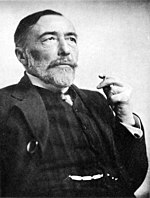 In his autobiography, published in 1912, Conrad talked about the importance of diction in writing.  In the following words on words, he reminds us that words make their strongest impression on a reader when they are selected not only for their sense, but also for their sound:

He who wants to persuade should put his trust not in the right argument, but in the right word. The power of sound has always been greater than the power of sense. I don’t say this by way of disparagement. It is better for mankind to be impressionable than reflective. Nothing humanely great—great, I mean, as affecting a whole mass of lives—has come from reflection. On the other hand, you cannot fail to see the power of mere words; such words as Glory, for instance, or Pity. I won’t mention any more. They are not far to seek. Shouted with perseverance, with ardor, with conviction, these two by their sound alone have set whole nations in motion and upheaved the dry, hard ground on which rests our whole social fabric . . . . Give me the right word and the right accent and I will move the world (1).

Today’s Challenge:  A Day to Be Dazed by Words

What is the best thing that anyone ever said about words?  What is an insightful quotation about words and language that you can use to inspire your writing?  Your task is to write about your favorite quotation about words.  Select from the examples below, or research your own.  Write out your quotation; then, explain why you find the quotation so insightful and how it inspires you to be a better writer. (Common Core Writing 1 – Argument)

Words are, of course, the most powerful drug used by mankind.

Words have no power to impress the mind without the exquisite horror of their reality. –Edgar Allan Poe

Words – so innocent and powerless as they are, as standing in a dictionary, how potent for good and evil they become in the hands of one who knows how to combine them. –Nathaniel Hawthorne