On this day William Wordsworth (1770-1850) wrote his sonnet Composed Upon Westminster Bridge, September 3, 1802. Instead of taking a photo or painting a picture, he crafted an image made of words, vividly describing the city of London and the Thames River.  Like a postcard, his poem is permanently postmarked by its title, providing both the time and place it was composed.

The original manuscript of the poem bears a note that provides more details on the circumstances surrounding its composition:  “Composed on the roof of a coach, on my way to France” (1). Unlike the typical bucolic scenes of his romantic verse, in this poem Wordsworth describes an urban scene:

This City now doth, like a garment, wear
The beauty of the morning; silent, bare,
Ships, towers, domes, theatres, and temples lie
Open unto the fields, and to the sky;
All bright and glittering in the smokeless air.
Never did sun more beautifully steep
In his first splendour, valley, rock, or hill;  (lines 4-10)

Follow Wordsworth’s model by painting your own picture in words.  What are the most unforgettable scenes that you can remember witnessing?  What made them worth capturing in descriptive words?  Select your single most vivid, memorable scene to immortalize.  Then, craft your description of the scene in a postcard poem. Select from your rhetorical palette the best devices to paint your scene:  metaphors, similes, sensory imagery, and concrete diction.  Strive to show rather than tell. Try to evoke the scene in your reader’s imagination, and postmark it with your title:  the place and time of composition. (Common Core Writing 2 – Expository)

On this date in 1901, Theodore Roosevelt gave a speech at the Minnesota State Fair where he used a line that was to become famously associated with him:  “Speak softly and carry a big stick.”  Roosevelt was Vice President at the time, but he would soon become the youngest president ever just eight days later when President William McKinley died from an assassin’s bullet. 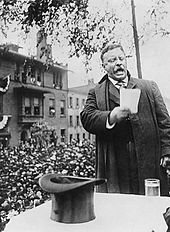 Roosevelt is not the only president to practice his powers of rhetoric.  Below are a few other vivid examples:

Character is like a tree and reputation like a shadow. The shadow is what we think of it; the tree is the real thing. -Abraham Lincoln

Today’s Challenge:  Wisdom from the Whitehouse
What would you argue is the smartest thing ever said by a United States president?  Argue for one of the quotations on this page, or research another one on your own.  Make your case by explaining your reasoning.  (Common Core Writing 1 – Argument)

Quotation of the Day:  No man who ever held the office of president would congratulate a friend on obtaining it. -John Adams

On September 1, 2011, psychologist Roy F. Baumeister released his book Willpower: Rediscovering the Greatest Human Strength.  Baumeister and his colleagues at Case Western Reserve University performed a classic study in willpower, which came to be known as “The Radish and Cookie Experiment.”  All the subjects in the experiment were told that they were being tested on taste perception.  To ensure that each participant arrived with an empty stomach, they were asked to skip a meal prior to the experiment.

Each participant entered a room filled with the scent of freshly-baked cookies.  On a table in front of them they found two plates:  one of cookies and one of white radishes.  Half of the study participants were designated as “radish eaters,” which meant that although they could see and smell the cookies, they were allowed only to eat radishes.  The other half of participants were designated as the “cookie-eaters” and were allowed only cookies.

In the second phase of the experiment, all subjects participated in a puzzle solving activity.  They were told that they could take as much time as they wanted to solve the puzzles; however, what they were not told is that the puzzles were impossible to solve.  The researchers then carefully recorded how much time the puzzle solvers worked before giving up.

While the cookie-eaters spent on average 19 minutes working on the puzzle, the radish-eaters lasted just 8 minutes, on average.

The conclusion that Beumesiter drew from this study is that the radish eaters gave up sooner than the cookie eaters because of what he called “ego-depletion.”  According to this theory, willpower is a limited resource.  The radish-eaters, for example, used up their reserve of mental energy resisting the tempting cookies.  This reduced their powers of self-control and resulted in their giving up so much sooner than the cookie-eaters, who maintained their stores of mental energy (1).

Reporting on the study in the The Atlantic magazine, writer Hans Villarica said,

In the psychology world, the key finding of this seemingly silly study was a breakthrough: self-control is a general strength that’s used across different sorts of tasks  — and it could be depleted. This proved that self-regulation is not a skill to be mastered or a rote function that can be performed with little consequence. It’s like using a muscle: After exercising it, it loses its strength, gets fatigued, and becomes ineffectual, at least in the short-term. (2)

2-Villarica, Hans. “The Chocolate-and-Radish Experiment That Birthed the Modern Conception of Willpower.”  The Atlantic  9 April 2012.