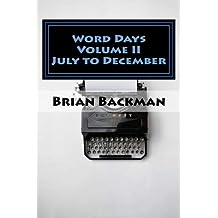 Today is the birthday of Cliff Hillegass, the founder of CliffsNotes. Working for a college bookstore in the 1930s, Hillegass developed contacts with a Toronto bookseller named Jack Cole, who published guides in Canada called “Cole’s Notes.” Years later Cole suggested to Hillegass that an American version of Cole’s Notes might be a good idea for U.S. students.

In August 1958, Hillegass took out a $4,000 loan and began CliffsNotes with his first title: Hamlet. He continued by publishing 15 more guides to Shakespeare’s plays. At the beginning, the guides were simply Cole’s Notes repackaged with a new cover: Cliff’s characteristic, and now famous, yellow and black cover.

In fact, CliffsNotes have become so popular and recognizable that they have become a part of the English language. For example, you might hear someone say, “Just give me the Cliffsnotes version,” meaning: “Give me a short summary instead of all the details.”

Hillegass never intended his guides to just summarize the classics or replace the reading of the classics. Nevertheless, his work has spawned numerous imitators, to the point that test prep and reading guides have become a multi-million dollar industry. Fairtest.org estimates that the amount spent on test prep material for the SAT alone amounts to $100 million dollars annually.

Hillegass sold his business to Hungry Minds, Inc. in 1999 for $14 million dollars. However, CliffsNotes.com still carries the following message from its founder:

A thorough appreciation of literature allows no short cuts. By usingCliffsNotes responsibly, reviewing past criticism of a literary work, and examining fresh points of view, you can establish a unique connection with a work of literature and can take a more active part in a key goal of education: redefining and applying classic wisdom to current and future problems.

The editors of CliffsNotes put together a list of the ‘Ten Titles that Every Adult Should Read.’ See if you can match each of the opening lines below with the appropriate title from the list.

A A Tale of Two Cities

B The Sun Also Rises

E The Sound and the Fury

Today’s Challenge: Short Story, Short Version
What is your favorite published short story?  How would you summarize its key characters, plot, and theme in just a few words?  Brainstorm a list of your favorite short stories.  Then, select one, and write a CliffNotes version, summarizing the key characters, setting, conflict, resolution, and theme of the story.  Assume your reader has not read the story, but also try to write such a great summary that your reader will want to read the actual complete version.
(Common Core Writing 2)

Quotation of the Day: Don’t fear failure so much that you refuse to try new things. The saddest summary of a life contains three descriptions: could have, might have, and should have. -Louis E. Boone